Dangerous Medicine: The Story behind Human Experiments with Hepatitis (Hardcover) 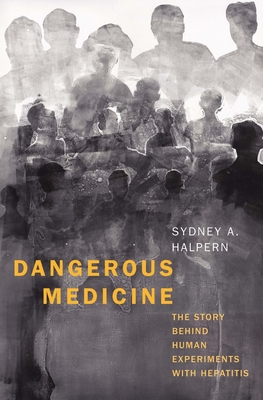 Dangerous Medicine: The Story behind Human Experiments with Hepatitis (Hardcover)

By Sydney A. Halpern


Available to Order - Usually Arrives in Our Store in 4 to 7 Days
The untold history of America’s mid-twentieth-century program of hepatitis infection research, its scientists’ aspirations, and the damage the project caused human subjects

“Sydney Halpern has written a compelling, if unsettling, history of hepatitis research during World War II and the Cold War. It will become a must-read for anyone interested in bioethics and medical history.”—Susan E. Lederer, author of Subjected to Science and Flesh and Blood

From 1942 through 1972, American biomedical researchers deliberately infected people with hepatitis. Government-sponsored researchers were attempting to discover the basic features of the disease and the viruses causing it, and to develop interventions that would quell recurring outbreaks. Drawing from extensive archival research and in-person interviews, Sydney Halpern traces the hepatitis program from its origins in World War II through its expansion during the initial Cold War years, to its demise in the early 1970s amid an outcry over research abuse.

The subjects in hepatitis studies were members of stigmatized groups—conscientious objectors, prison inmates, the mentally ill, and developmentally disabled adults and children. The book reveals how researchers invoked military and scientific imperatives and the rhetoric of a common good to win support for the experiments and access to recruits. Halpern examines the participants’ long-term health consequences and raises troubling questions about hazardous human experiments aimed at controlling today’s epidemic diseases.
Sydney A. Halpern is professor emerita at University of Illinois at Chicago, and lecturer in the Program in Medical Humanities and Bioethics, Feinberg School of Medicine, Northwestern University.

"Halpern’s story is chilling, told with clarity and commendable brevity and, most importantly, is of crucial relevance today. The emergence of Covid-19 galvanised calls for the creation of experiments in which volunteers would be infected with SARS-CoV-2 to help understand how the disease spreads and behaves. Some of these studies continue.”—Robin McKie, The Observer

“Sydney Halpern has written a compelling, if unsettling, history of hepatitis research during World War II and the Cold War. It will become a must-read for anyone interested in bioethics and medical history.”—Susan E. Lederer, author of Subjected to Science and Flesh and Blood

“This is a terrific book on a terrible subject, prodigiously and impressively researched. It will be a clear and well-argued addition to our thinking on bioethics and medical history.”—Susan M. Reverby, author of Examining Tuskegee and Co-Conspirator for Justice


“An immensely important account of decades of human experiments that raised serious moral questions, not only in hindsight as is often claimed, but also at the time they were conducted.”—Jonathan D. Moreno, Co-author, Everybody Wants to Go to Heaven but Nobody Wants to Die: Bioethics and the Transformation of Healthcare in America