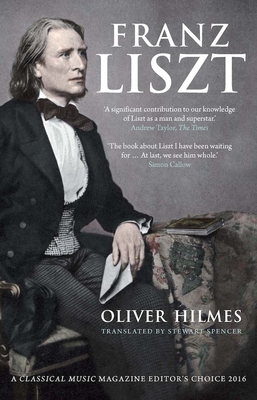 "Makes a significant contribution to our knowledge of Liszt as a man and superstar. Hilmes shines a light into the shadows behind a life lived in the spotlight."—Andrew Taylor, Times

Hungarian composer Franz Liszt (1811–1886) was an anomaly. A virtuoso pianist and electrifying showman, he toured extensively throughout the European continent, bringing sold-out audiences to states of ecstasy while courting scandal with his frequent womanizing. Drawing on new, highly revealing documentary sources, including a veritable treasure trove of previously unexamined material on Liszt’s Weimar years, best-selling author Oliver Hilmes shines a spotlight on the extraordinary life and career of this singularly dazzling musical phenomenon.

Whereas previous biographies have focused primarily on the composer’s musical contributions, Hilmes showcases Liszt the man in all his many shades and personal reinventions: child prodigy, Romantic eccentric, fervent Catholic, actor, lothario, celebrity, businessman, genius, and extravagant show-off. The author immerses the reader in the intrigues of the nineteenth-century European glitterati (including Liszt’s powerful patrons, the monstrous Wagner clan) while exploring the true, complex face of the artist and the soul of his music. No other Liszt biography in English is as colorful, witty, and compulsively readable, or reveals as much about the true nature of this extraordinary, outrageous talent.
Oliver Hilmes, the author of several best-selling biographies, lives in Berlin, Germany. Stewart Spencer is an acclaimed translator whose work includes biographies of Gustav Mahler, Richard Wagner, Cosima Wagner, and W. A. Mozart.

". . . makes a significant contribution to our knowledge of Liszt as a man and superstar. Hilmes shines a light into the shadows behind a life lived in the spotlight, and he finds some surprising and indeed entertaining details there."—Andrew Taylor, Times

"If this book has a once-over-lightly feel, that is because there were many intertwined strands in Liszt’s extraordinary life, each of which could merit a book in itself. . . . Hilmes is illuminating on the emergence—and continuance into old age—of Liszt’s preternatural gifts as a pianist. And by drawing on hitherto unpublished documentary sources he provides a riveting chronicle of the composer’s tangled relationships."—Economist

"Invaluable: it is brilliantly written and comprehends material found nowhere else. Spencer's English translation is beyond praise."—Choice

"[Hilmes] sheds useful light on the way that Liszt’s achievement arose as much from his weaknesses as from his strengths."—New York Review of Books

“Hilmes conveys the authentic alongside the astonishing. . . . Engaging a wealth of prior scholarship, and incorporating several unpublished primary sources, he brings us a step closer to fully appreciating Liszt’s superstardom.”—Michael Vitalino, Notes

"This is the book about Liszt I have been waiting for, vividly evoking both him and his context to reveal him as one the central figures—if not the central figure—of Western music in the nineteenth century, a vital link between Beethoven and Bartók, and a truly great and generous man. At last, we see him whole."—Simon Callow