Bulldozer: Demolition and Clearance of the Postwar Landscape (Hardcover) 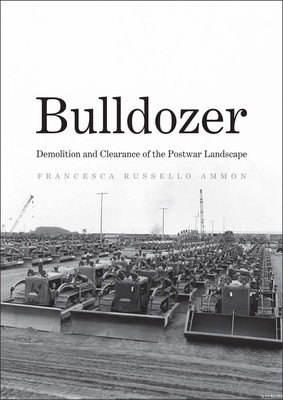 Bulldozer: Demolition and Clearance of the Postwar Landscape (Hardcover)


Title unavailable, please email for information.
The first history of the bulldozer and its transformation from military weapon to essential tool for creating the post–World War II American landscape

Although the decades following World War II stand out as an era of rapid growth and construction in the United States, those years were equally significant for large-scale destruction. In order to clear space for new suburban tract housing, an ambitious system of interstate highways, and extensive urban renewal development, wrecking companies demolished buildings while earthmoving contractors leveled land at an unprecedented pace and scale. In this pioneering history, Francesca Russello Ammon explores how postwar America came to equate this destruction with progress.

The bulldozer functioned as both the means and the metaphor for this work. As the machine transformed from a wartime weapon into an instrument of postwar planning, it helped realize a landscape-altering “culture of clearance.” In the hands of the military, planners, politicians, engineers, construction workers, and even children’s book authors, the bulldozer became an American icon. Yet social and environmental injustices emerged as clearance projects continued unabated. This awareness spurred environmental, preservationist, and citizen participation efforts that have helped to slow, though not entirely stop, the momentum of the postwar bulldozer.
Francesca Russello Ammon is assistant professor of city and regional planning and historic preservation at the University of Pennsylvania. She studies the history of the built environment, focusing on the social, material, and cultural life of cities in the twentieth-century United States. She lives in Philadelphia, PA.
“Ammon . . . puts the earthmoving machine at the center of this absorbing history of American postwar construction.”—Booklist

“Ammon has penned a surprisingly engrossing story about an unlikely topic.”—Choice

“[T]his is perhaps the best indication of the power of Ammon’s argument. . . . Ammon’s sparkling history of the machine and the world it helped create insists that both be drawn to the fore.”—Kyle Shelton, Environmental History


“Astute and insightful . . . Business historians . . . could hardly ask for a better example than the cautionary tales in Bulldozer.”—Business History Review

"Yale University Press deserves acknowledgement for the quality of design and overall readability of the book. That said, higher production standards for photographs and drawings would enhance readers’ ability to interpret the graphic sources essential for a work of visual studies."—Greg Hise, Journal of American History

"Bulldozer is a well-written, lively, and exceptionally well-illustrated book that will be interesting to scholars of urban and environmental history, as well as the history of technology and material culture; and it would be very useful for graduate and undergraduate courses in all of those fields."—Robert R. Gioielli, Reviews in American History


"The book deserves to be read widely in urban studies, not only because it tells the history of an absolutely crucial piece of technology that remade the American landscape, but because Ammon,step by step, makes us look again at post-war American culture."—Max Page, Planning Perspectives

Winner of the 2017 Lewis Mumford Prize for the best book on American city and regional planning, given by the Society for American City and Regional Planning History.

“An excellent and enjoyable history of the transformation of the bulldozer from military weapon to instrument of urban planning.”—Jo Guldi, Brown University

“The bulldozer! How obvious! But no one before Francesca Ammon realized that the biography of this protean machine was the royal road to an illuminating understanding of Schumpeter's 'creative destruction' of capitalism. An inspired topic, a perfect metaphor for effacing the past and engineering the future. Carried out with dash, breadth, attention to symbolism, technical knowledge, and attention to historical detail. The difference between Baron Haussmann's Paris and Robert Moses's New York is that Moses had the bulldozer and dynamite and Haussmann did not.”—James C. Scott, Yale University

“Ammon has found an original topic of wide appeal. Her creative and multi-faceted approach leads her to countless new, deeply engrossing discoveries about the history of clearing, building, and rebuilding in the mid-20th century.”—Alison Isenberg, Princeton University

“In this original and incisive book, Ammon shows that machines and methods developed for warfare remade American landscapes and cities after World War II.”—Edmund Russell, author of War and Nature:  Fighting Humans and Insects with Chemicals from World War I to Silent Spring

“Strikingly original and thoroughly engaging, Bulldozer shows how an adulation of destruction-as-opportunity, honed during World War II, became deeply engrained in postwar American visual culture and the design politics of urban, suburban, and superhighway development. By viewing the bulldozer as both machine and mindset, Ammon reveals the fascinating confluence of celebratory staging and complex environmental and social loss.”—Lawrence J. Vale, author of Purging the Poorest: Public Housing and the Design Politics of Twice-Cleared Communities