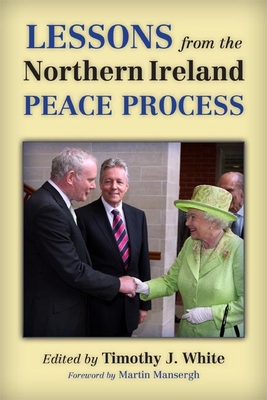 By Timothy J. White (Editor), Martin Mansergh (Foreword by)
Please email or write store for pricing and availability information.
Special Request - May Not Be Available

From the early 1970s through the mid-1990s, Northern Ireland was the site of bitter conflict between those struggling for reunification with the rest of Ireland and those wanting the region to remain a part of the United Kingdom. After years of strenuous negotiations, nationalists and unionists came together in 1998 to sign the Good Friday Agreement. Northern Ireland's peace process has been deemed largely successful. Yet remarkably little has been done to assess in a comprehensive fashion what can be learned from it.
Lessons from the Northern Ireland Peace Process incorporates recent research that emphasizes the need for civil society and a grassroots approach to peacebuilding while taking into account a variety of perspectives, including neoconservatism and revolutionary analysis. The contributions, which include the reflections of those involved in the negotiation and implementation of the Good Friday Agreement, also provide policy prescriptions for modern conflicts.
This collection of essays in Lessons from the Northern Ireland Peace Process fills a void by articulating the lessons learned and how—or whether—the peace processes can be applied to other regional conflicts.

Timothy J. White is professor of political science at Xavier University. His articles on the peace process in Northern Ireland have appeared in Dynamics of Asymmetric Conflict, British Politics Review, and Peace Review. He was a visiting fellow at the Moore Institute at the National University of Ireland Galway.

“Showcases an impressive group of specialists and offers an innovative and thought-provoking analysis, extending our understanding of the Northern Ireland peace process but, importantly, also contributing to a wider debate on civil wars and negotiated settlements.”—Theresa Reidy, University College Cork, editor of Irish Political Studies

"This edited volume usefully brings together a number of respected scholars who apply both international relations theory and diplomatic history in ways that illuminate both the process and the peace in Northern Ireland. The lessons it offers extend well beyond 'the Troubles.'"—Mitchell B. Reiss, former U.S. special envoy to Northern Ireland

“An excellent volume. . . . Tim White has done an admirable job as editor. . . . Useful not only for students of the Northern Ireland conflict, but to a much wider audience including academics, journalists, and governmental and other participants who deal with peace processes.”—International Journal of Conflict Management

“A coherent and thorough empirical analysis of the process itself and a thoughtful discussion of what these lessons, if there are any, can contribute to the wider debate on peace building. . . . Displays a great appreciation for the difficulties of resolving civil disputes both in the Northern Irish case and beyond and the need to put conflicts into their own context.”—Political Studies Review