Inside a Class Action: The Holocaust and the Swiss Banks (Hardcover) 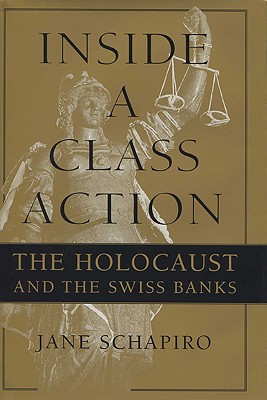 By Jane Schapiro (Editor)
Please email or write store for pricing and availability information.
Out of Print

On October 21, 1996, attorney Michael Hausfeld, with a team of lawyers, filed a class-action complaint against Union Bank of Switzerland, Swiss Bank Corporation, and Credit Suisse on behalf of Holocaust victims. The suit accused the banks of, among other things, acting as the chief financiers for Nazi Germany. Hausfeld wanted to use the suit to prove that the banks not only concealed and refused to return millions of dollars in dormant accounts, but that they acted as a conduit for looted assets and slave labor profits. Such behavior, he charged, violated the code of ethics known as customary international law. On August 12, 1998, the plaintiffs and banks reached a $1.25 billion settlement.
Through interviews with a wide range of people involved in the case and detailed research of documents and court transcripts, Jane Schapiro shows the ways that egos, personalities, and values clash in such a complex and emotionally charged case. "Inside a Class Action" provides an insider's view of a major lawsuit from its inception to its conclusion, which will appeal to anyone interested in human rights, reparations, and international law.

Jane Schapiro is a freelance writer who lives near Washington, D.C. She is the author of a volume of poetry, "Tapping This Stone," and her work has appeared in such publications as the "Christian Science Monitor," "Women s Review of Books," "Gettysburg Review," and "American Scholar.""

"With a mastery of the legal issues and a keen eye for the human drama, Schapiro has made the intensity of the historic litigation come alive."Michael Berenbaum, director of the Sigi Ziering Institute and author of The World Must Know

"A must read for anybody interested in the details of how a group of dogged individuals uncovered the truth involving Swiss banks and the Holocaust."Kenneth R. Feinberg, adjunct professor of law, Georgetown University Law Center

"The link between the anesthetized corporate world of banking and the evil of the killing machine known as the Holocaust is a sobering one, and the utilization of the American court system to illuminate that link in an effort to attain justice, however belatedly, is surely of interest."Frank Tuerkheimer, Robert L. Habush-Bascom Professor, University of WisconsinMadison Law School