Deserting from the Culture Wars (Paperback) 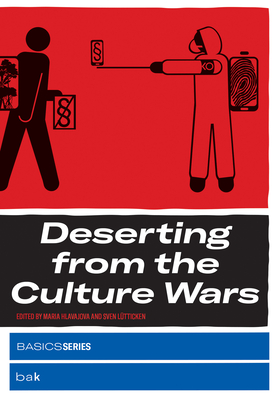 By Maria Hlavajova (Editor), Sven Lutticken (Editor)
$19.95
Available to Order - Usually Arrives in Our Store in 4 to 7 Days

Artists and writers consider a tactical desertion from the “culture wars”—a refusal to be distracted, an embrace of the emancipatory understanding of culture.

Deserting from the Culture Wars reflects upon and intervenes in our current moment of ever-more polarizing ideological combat, often seen as the return of the “culture wars.” How are these culture wars defined and waged? Engaging in a theater of war that has been delineated by the enemy is a shortcut to defeat. Getting out of the reactive mode that produces little but a series of Pavlovian responses, this book proposes a tactical desertion from the culture wars as they are being waged today—a refusal to play the other side's war games, an unwillingness to be distracted.

The volunteer troops in the culture wars are often given marching orders by professional masters of propaganda. What, then, might artists and others who are professionally engaged with images and imaginaries, with narratives and assemblies, have to contribute to the collective discovery of different modes of living culture? Far from limiting the performance of culture to a one-sided speech act, to the abstract “right to say something,” an emancipatory understanding of culture needs to conceive of it as embodied and intersubjective—as a collective performance.

Maria Hlavajova is the Founding General and Artistic Director of BAK, basis voor actuele kunst, Utrecht. She is coeditor of Former West: Art and the Contemporary after 1989, and Propositions for Non-Fascist Living: Tentative and Urgent (both published by the MIT Press).

Sven Lütticken, an art historian and critic, teaches at Vrije Universiteit, Amsterdam. He is the author of Cultural Revolution: Aesthetic Practice after Autonomy (Sternberg Press) and other books.