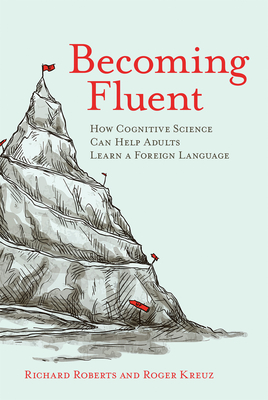 
Available to Order - Usually Arrives in Our Store in 4 to 7 Days
How adult learners can draw upon skills and knowledge honed over a lifetime to master a foreign language.

Adults who want to learn a foreign language are often discouraged because they believe they cannot acquire a language as easily as children. Once they begin to learn a language, adults may be further discouraged when they find the methods used to teach children don't seem to work for them. What is an adult language learner to do? In this book, Richard Roberts and Roger Kreuz draw on insights from psychology and cognitive science to show that adults can master a foreign language if they bring to bear the skills and knowledge they have honed over a lifetime. Adults shouldn't try to learn as children do; they should learn like adults.

Roberts and Kreuz report evidence that adults can learn new languages even more easily than children. Children appear to have only two advantages over adults in learning a language: they acquire a native accent more easily, and they do not suffer from self-defeating anxiety about learning a language. Adults, on the other hand, have the greater advantages—gained from experience—of an understanding of their own mental processes and knowing how to use language to do things. Adults have an especially advantageous grasp of pragmatics, the social use of language, and Roberts and Kreuz show how to leverage this metalinguistic ability in learning a new language.

Learning a language takes effort. But if adult learners apply the tools acquired over a lifetime, it can be enjoyable and rewarding.

Richard Roberts is a Foreign Service Officer currently serving as the Public Affairs Officer at the US Consulate General in Okinawa, Japan. He is the coauthor (with Roger Kreuz) of of Becoming Fluent: How Cognitive Science Can Help Adults Learn a Foreign Language and Getting Through: The Pleasures and Perils of Cross-Cultural Communication, both published by the MIT Press.

Roger Kreuz is Associate Dean and Director of Graduate Studies in the College of Arts and Sciences and Professor of Psychology at the University of Memphis. He is the coauthor (with Richard Roberts) of Becoming Fluent: How Cognitive Science Can Help Adults Learn a Foreign Language, Getting Through: The Pleasures and Perils of Cross-Cultural Communication, and Changing Minds: How Aging Affects Language and How Language Affects Aging (all published by the MIT Press).
The authors bring forth concepts, research, and theories in cognitive science to explain how adults learn, making this book that is packed full of useful scientific information applicable to other learning situations.—Library Journal—

The book is helpful for the adult language student but also full of useful information that we can use in other learning situations.

Kreuz and Roberts... begin by noting three myths associated with language learning in adulthood: adults cannot acquire a foreign language as easily as children, adults should approach learning the way children do, and one should not use a first language to translate a target foreign language. The authors devote the book to slaying these myths with the weapon of cognitive science.... Studded with pearls of wisdom, the book touches on the concepts of self-handicapping, cultural awareness, and the art of memory. Including notes, suggested readings, and references, this is an easy, entertaining, thought-provoking read.

One final piece of advice offered by the authors is that readers should approach learning with not only a healthy mind and body, but also with a positive attitude toward the learning process itself. Roberts and Kreuz shine here, as they inspire their readers to truly embrace the language and culture they have adopted.