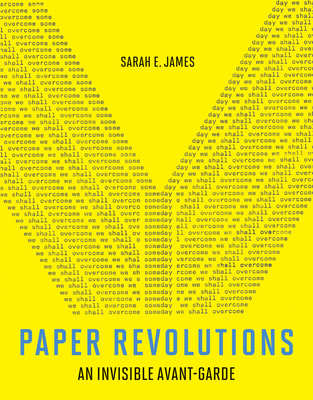 
Available to Order - Usually Arrives in Our Store in 4 to 7 Days
The experimental practices of a group of artists in the former East Germany upends assumptions underpinning Western art’s postwar histories.

In Paper Revolutions, Sarah James offers a radical rethinking of experimental art in the former East Germany (the GDR). Countering conventional accounts that claim artistic practices in the GDR were isolated and conservative, James introduces a new narrative of neo-avantgarde practice in the Eastern Bloc that subverts many of the assumptions underpinning Western art’s postwar histories. She grounds her argument in the practice of four artists who, uniquely positioned outside academies, museums, and the art market, as these functioned in the West, created art in the blind spots of state censorship. They championed ephemeral practices often marginalized by art history: postcards and letters, maquettes and models, portfolios and artists’ books. Through their “lived modernism,” they produced bodies of work animated by the radical legacies of the interwar avant-garde.

James examines the work and daily practices of the constructivist graphic artist, painter, and sculptor Hermann Glöckner; the experimental graphic artist and concrete and sound poet Carlfriedrich Claus; the mail artist, concrete poet, and conceptual artist Ruth Wolf-Rehfeldt; and the mail artist, “visual poet,” and installation artist Karla Sachse. She shows that all of these artists rejected the idea of art as a commodity or a rarefied object, and instead believed in the potential of art to create collectivized experiences and change the world. James argues that these artists, entirely neglected by Western art history, produced some of the most significant experimental art to emerge from Germany during the Cold War.

Sarah E. James, an art historian and writer, is the author of Common Ground: German Photographic Cultures Beyond the Iron Curtain. Currently a Gerda Henkel Professorial Fellow in Frankfurt am Main, she was Associate Professor in History of Art at University College London and Lecturer at the University of Oxford.