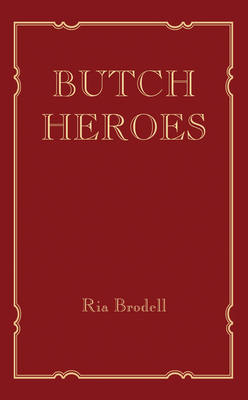 
On Our Shelves Now
Portraits and texts recover lost queer history: the lives of people who didn't conform to gender norms, from the fifteenth through the twentieth centuries.

Katherina Hetzeldorfer, tried “for a crime that didn't have a name” (same sex sexual relations) and sentenced to death by drowning in 1477; Charles aka Mary Hamilton, publicly whipped for impersonating a man in eighteenth-century England; Clara, aka “Big Ben,” over whom two jealous women fought in 1926 New York: these are just three of the lives that the artist Ria Brodell has reclaimed for queer history in Butch Heroes. Brodell offers a series of twenty-eight portraits of forgotten but heroic figures, each accompanied by a brief biographical note. They are individuals who were assigned female at birth but whose gender presentation was more masculine than feminine, who did not want to enter into heterosexual marriage, and who often faced dire punishment for being themselves.

Brodell's detailed and witty paintings are modeled on Catholic holy cards, slyly subverting a religious template. The portraits and the texts offer intriguing hints of lost lives: cats lounge in the background of domestic settings; one of the figures is said to have been employed variously as “a prophet, a soldier, or a textile worker”; another casually holds a lit cigarette. Brodell did extensive research for each portrait, piecing together a life from historical accounts, maps, journals, paintings, drawings, and photographs, finding the heroic in the forgotten.

Ria Brodell is an artist and educator based in Boston who has had solo and group exhibitions throughout the United States and whose work has been featured in the Guardian, ARTNews, the Boston Globe, and New American Paintings. Brodell is a part-time lecturer at the School of the Museum of Fine Arts at Tufts University.
Visual artist Brodell delivers an ambitious and wonderfully celebratory ode to the lives of 28 people over many centuries 'assigned female at birth' who 'had documented relationships with women, and whose gender presentation was more masculine than feminine"…This is a serious—and seriously successful—queer history recovery project.—Publishers Weekly—

Butch Heroes is a fascinating, intersectional, feminist art-text project, and overall a rather wonderful reclamatory book of LGBT history that subvert and resonates in the human psyche.

The portraits give homage to contemporary ideas of queer ancestry, and in doing so give strength to trans and non-binary communities currently under attack. That makes Butch Heroes worth celebrating.

Brodell has created a frank, compelling, sensitive, and celebratory compendium of gender-role pioneers, telling the stories and shining light into a corner of history that has long been in darkness.

Brodell has created a frank, compelling, sensitive, and celebratory compendium of gender-role pioneers, telling the stories and shining light into a corner of history that has long been in darkness.

These stories reveal the lives of gender non-conforming individuals from many eras in history who stayed true to themselves despite living under the narrowly defined rules and roles governing gender in their particular culture.

A splendid and insightful collection.