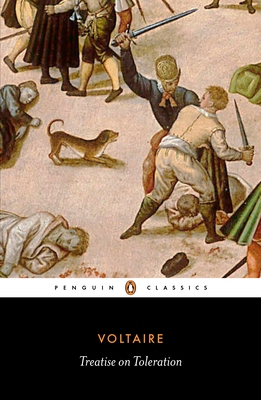 
On Our Shelves Now
One of the most important essays on religious tolerance and freedom of thought, a French bestseller in the wake of the Charlie Hebdo attacks

In 1762 Jean Calas, a merchant from Toulouse, was executed after being falsely accused of killing his son. As it became clear that Calas was in fact persecuted for being a Protestant, Voltaire began a campaign to get his sentence overturned—and in the process made the case for some of the most important values upheld by the Enlightenment, from religious tolerance to freedom of thought. Treatise on Toleration is the story of that case and a screed against fanaticism—a book that is as fresh and urgent today as it was when it was first published in 1763.

For more than seventy years, Penguin has been the leading publisher of classic literature in the English-speaking world. With more than 1,700 titles, Penguin Classics represents a global bookshelf of the best works throughout history and across genres and disciplines. Readers trust the series to provide authoritative texts enhanced by introductions and notes by distinguished scholars and contemporary authors, as well as up-to-date translations by award-winning translators.
Voltaire (François-Marie Arouet; 1694—1778) was one of the key thinkers of the European Enlightenment. Of his many works, Candide remains the most popular.

Desmond Clarke (translator) is a professor of philosophy at University College Cork and the author of a number of books on Descartes and the seventeenth century.