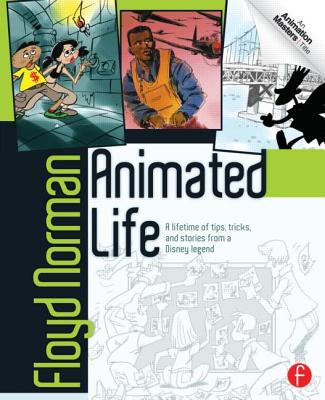 By Floyd Norman
Email or call for price. Handling fee may apply.
Special Request - May Not Be Available

Since Steamboat Mickey, animators have been creating characters and films that are charming, warm and humorous, allowing people to connect with the animated medium. Animation fans love the characters for a lifetime. This is the legacy of the countless animators and artists who created the classic characters and fun stories, and it is the legacy of Disney Legend, Floyd Norman. Written with wit and verve, Animated Life is a guided tour through an entire lifetime of techniques, practical hands-on advice and insight into an entire industry. This is a vital tutorial in animation's past, present and future for students who are now poised to be part of another new generation in the art form. Apply artistic magic to your own projects and garner valuable insight and inspiration from a True Disney legend. Animated Life is a classic in the making with completely relevant techniques and tools for the contemporary animation or fine arts professional.

Floyd E. Norman (born c. 1936) is an American animator who worked on the Walt Disney animated features Sleeping Beauty, The Sword in the Stone and The Jungle Book along with various animated short projects at Disney in the late '50s and early '60s. After Walt Disney's death in 1966 Floyd Norman left Disney Studios to co-found the AfroKids animation studio with business partner animator/director Leo Sullivan. Norman and Sullivan worked together on various projects such as the original Hey! Hey! Hey! It's Fat Albert television special which aired in 1969 on NBC. (not to be confused with the later Fat Albert series made by Filmation Associates.) Floyd Norman returned to Disney at one point in the early 1970s to work on the Disney animated feature Robin Hood. More recently he has worked on motion pictures for the Walt Disney Animation Studios and Pixar Animation Studios, having contributed creatively as a story artist on films such as Toy Story 2 and Monsters, Inc. for Pixar and Mulan, Dinosaur and The Hunchback of Notre Dame for Walt Disney Animation among others. He continues to work for the Walt Disney Co. as a freelance consultant on various projects. Norman had his start as an assistant to comic book artist Bill Woggon who lived in the Santa Barbara area that Norman grew up in. In the 1980s he worked as a writer in the comic strip department at Disney and was the last scripter for the Mickey Mouse comic strip before it was discontinued.[1] Floyd Norman has also published several books of cartoons inspired by his lifetime of experiences in the animation industry: Faster! Cheaper!, Son of Faster, Cheaper!, and How The Grinch Stole Disney . He is currently a columnist for the websites JimHillMedia.com and AfroKids.com. He was named a Disney Legend in 2007. In 2008, he appeared as Guest of Honor at Anthrocon 2008 [2] and at Comic-Con International where he was awarded an Inkpot Award.