Constructing Basic Liberties: A Defense of Substantive Due Process (Hardcover) 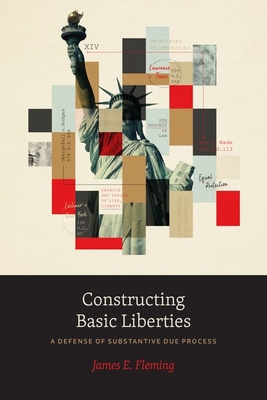 Constructing Basic Liberties: A Defense of Substantive Due Process (Hardcover)

A strong and lively defense of substantive due process.

From reproductive rights to marriage for same-sex couples, many of our basic liberties owe their protection to landmark Supreme Court decisions that have hinged on the doctrine of substantive due process. This doctrine is controversial—a battleground for opposing views around the relationship between law and morality in circumstances of moral pluralism—and is deeply vulnerable today.

Against recurring charges that the practice of substantive due process is dangerously indeterminate and irredeemably undemocratic, Constructing Basic Liberties reveals the underlying coherence and structure of substantive due process and defends it as integral to our constitutional democracy. Reviewing the development of the doctrine over the last half-century, James E. Fleming rebuts popular arguments against substantive due process and shows that the Supreme Court has constructed basic liberties through common law constitutional interpretation: reasoning by analogy from one case to the next and making complex normative judgments about what basic liberties are significant for personal self-government.

Elaborating key distinctions and tools for interpretation, Fleming makes a powerful case that substantive due process is a worthy practice that is based on the best understanding of our constitutional commitments to protecting ordered liberty and securing the status and benefits of equal citizenship for all.
James E. Fleming is the Honorable Paul J. Liacos Professor of Law at Boston University School of Law. His many books include Fidelity to Our Imperfect Constitution; Ordered Liberty; Constitutional Interpretation; Securing Constitutional Democracy; and American Constitutional Interpretation. He has held faculty research fellowships at Princeton University’s Program in Law and Public Affairs and Harvard University’s Safra Center for Ethics. He is the former editor of Nomos, the annual book of the American Society for Political and Legal Philosophy, and the past president of the society.

"Constructing Basic Liberties offers a nuanced and comprehensive defense of common law constitutional interpretation as it has been applied to one of the Constitution’s most general and far-reaching provisions: the due process clause."
— The New York Review of Books

"Substantive due process is a legal tool. Judges can define an unenumerated right—to marry or travel, for instance—as so fundamental that it is among the liberties that the constitutional due process clause protects. For example, in the past, it was used to incorporate economic rights allowing businesspeople to oppress workers....Recently, however, it was used to guarantee gay marriage and the right of bodily autonomy in Roe v. Wade. Fleming argues that these cases are logically derived from a right to privacy and distinguishes them from the 'grave errors' of the past."
— Choice

“Fleming brings to life great clashes between Justice Kennedy and Justice Scalia, between two competing understandings of the Constitution, asking “Is it a basic charter of abstract aspirational principles like liberty and equality? Or a code of specific, enumerated rights whose meaning is determined by the deposit of concrete historical practices extant at the time of the adoption of the Fourteenth Amendment in 1868? Ultimately, Fleming shows that the Court’s modern due process cases—those protecting reproductive rights, sexual autonomy, marriage, and parenthood—are no less legitimate, from a constitutional or democratic perspective, than equal protection cases that are generally viewed as uncontroversial. In fact, Fleming convincingly demonstrates that the rights protected by the modern due process decisions are critical to the equal citizenship of women and LGBTQ individuals.”
— Reva Siegel and Douglas NeJaime, Yale Law School

“In Constructing Basic Liberties, James Fleming offers a powerful and persuasive defense of the much-maligned Supreme Court practice of recognizing unenumerated rights under the aegis of “substantive due process.” Cases recognizing such rights as contraception, abortion, and same-sex marriage do not, as conservatives claim, augur the end of legislation based on morality, nor do they simply substitute judicial values for popular ones. Responding to progressives who would relocate rights in equal protection, Fleming also explains how equality should complement rather than supplant liberty. Even if the Trump-packed high court overrules Roe v. Wade, protection for a domain of what Fleming aptly terms “personal self-government” likely will and certainly should remain a durable feature of American constitutionalism.”
— Michael C. Dorf, Cornell Law School