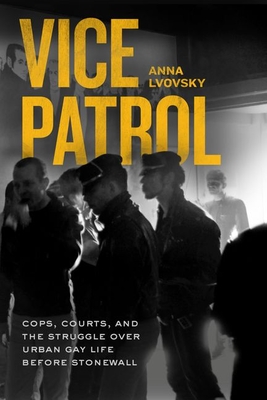 In Vice Patrol, Anna Lvovsky chronicles this painful story, tracing the tactics used to criminalize, profile, and suppress gay life from the 1930s through the 1960s, and the surprising controversies those tactics often inspired in court. Lvovsky shows that the vice squads’ campaigns stood at the center of live debates about not only the law’s treatment of queer people, but also the limits of ethical policing, the authority of experts, and the nature of sexual difference itself—debates that had often unexpected effects on the gay community’s rights and freedoms. Examining those battles, Vice Patrol enriches understandings of the regulation of queer life in the twentieth century and disputes about police power that continue today.
Anna Lvovsky is assistant professor of law at Harvard Law School. Her website is https://www.annalvovsky.com/.

"Lvovsky has written an important history of antigay policing in the US between 1930 and 1970. . . . Lvovsky dives into municipal archives, court records, and psychological literature to interrogate queer tropes, taking care to guide readers through this narrative. . . . Lvovsky deftly handles these topics with nuance and compassion. Those studying law, history, gender and sexuality, and political science will benefit from her work in terms of understanding queer life in the 20th century, the professionalization of policing, and how the two intersected to shape (mis)understandings about the other. This is a necessary title for all libraries at all levels. . . . Essential."
— Choice

"Anna Lvovsky’s Vice Patrol: Cops, Courts, and the Struggle over Urban Gay Life before Stonewall offers an exciting, novel contribution to the fast-growing field of police history in the United States. . . . Vice Patrol reshapes our understanding of the state’s regulation of gay life, and it complicates long-held assumptions about the relationship between police knowledge and police power."
— American Journal of Legal History

"With precise details and careful analysis, Vice Patrol tells a fascinating story about how the policing of homosexuality from the 1940s to the 1960s was far more contradictory and contested than we might think, and how courts of law played a crucial role in the emerging understanding and visibility of LGBT life."
— The Gay & Lesbian Review Worldwide

"In Vice Patrol: Cops, Courts, and the Struggle Over Urban Gay Life Before Stonewall, Anna Lvovsky examines with both precision and breadth a time period during which litigants in queer society encountered considerably greater difficulty in the justice system... This important book casts new light on the legal intricacies and political realities of anti-gay legislation several generations before courts began looking with disfavor on laws stigmatizing or even criminalizing members of the queer community."
— Criminal Law and Criminal Justice Books

"Lvovsky chronicles the tactics used to criminalize, profile, and suppress gay life in the US from the1930s through the 1960s, and the surprising controversies those tactics often inspired in court. She finds that the vice squads’ campaigns stood at the center of debates about not only the law’s treatment of queer people, but also the limits of ethical policing, the authority of experts, and the nature of sexual difference itself—debates that had often unexpected effects on the LGBTQ community’s civil liberties, and that continue to be relevant today."
— Law & Social Inquiry

“Lvovsky has done incredible detective work to take us deep inside the machinery of antigay policing during its peak years. Focusing on three distinct sites—the regulation of gay bars by state liquor agencies, the work of plainclothes decoys, and the policing of public restrooms through ‘peepholes’—Lvovsky shows that a legal system we assumed to be monolithically repressive was in fact internally divided about these practices. This subtle and smart book not only illuminates the boundaries around sexual difference but criminal justice as well. Revelatory in every sense of the word.”
— Margot Canaday, Princeton University

"Lvovsky takes the vice patrolman—the villain who lurks at the edges of virtually every work of the queer communities that flourished in twentieth-century U.S. cities—and insistently pulls him into the spotlight. Vice Patrol is ambitious, meticulously researched, exceptionally well-conceived, and startlingly original. It deserves a wide readership among historians of law and legal history, LGBTQ history, urban history, and the history of policing and punishment. It is, in fact, a tour de force that will be read and reread by every scholar in the field and will lead us to ask new questions of our sources in the years to come."
— Timothy Stewart-Winter, Rutgers University

“Lvovsky has written a splendid, insightful history of anti-gay policing in mid-twentieth century America. Vice Patrol shows how investigatory tactics evolved and how they prompted and were in turn shaped by debates about the nature and prevalence of same-sex desire, the appropriate limits on law enforcement, and the kinds of authority and expertise that should matter in answering those questions. It's a gripping read, combining rich, ground-level detail with sober assessments of what those decades-old struggles signified and what lessons they hold for us today.”
— David Sklansky, Stanford Law School

“’The 'police’ and ‘the gay community’ are often portrayed as monolithic entities. In Vice Patrol, Lvovsky shows how each entity revealed the extraordinary diversity of the other through their interactions in the pre-Stonewall United States. This is the debut of an important new scholar, who can etch a legal world in scrimshaw with strokes that are both bold and sure.”
— Kenji Yoshino, New York University School of Law