The Demon in the Machine: How Hidden Webs of Information Are Solving the Mystery of Life (Hardcover) 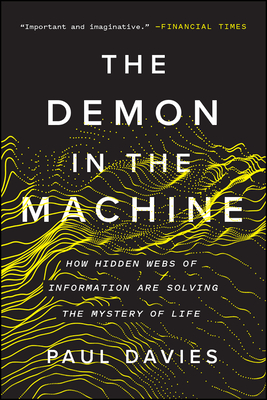 The Demon in the Machine: How Hidden Webs of Information Are Solving the Mystery of Life (Hardcover)

A Financial Times, Sunday Times, and Telegraph Best Science Book of the Year

What is life? For generations, scientists have struggled to make sense of this fundamental question, for life really does look like magic: even a humble bacterium accomplishes things so dazzling that no human engineer can match it. Huge advances in molecular biology over the past few decades have served only to deepen the mystery.

In this penetrating and wide-ranging book, world-renowned physicist and science communicator Paul Davies searches for answers in a field so new and fast-moving that it lacks a name; it is a domain where biology, computing, logic, chemistry, quantum physics, and nanotechnology intersect. At the heart of these diverse fields, Davies explains, is the concept of information: a quantity which has the power to unify biology with physics, transform technology and medicine, and force us to fundamentally reconsider what it means to be alive—even illuminating the age-old question of whether we are alone in the universe.

From life’s murky origins to the microscopic engines that run the cells of our bodies, The Demon in the Machine journeys across an astounding landscape of cutting-edge science. Weaving together cancer and consciousness, two-headed worms and bird navigation, Davies reveals how biological organisms garner and process information to conjure order out of chaos, opening a window onto the secret of life itself.
Paul Davies is a theoretical physicist, cosmologist, astrobiologist, broadcaster, and best-selling author. A winner of the prestigious Templeton Prize, he is Regents’ Professor of Physics and director of the Beyond Center for Fundamental Concepts in Science at Arizona State University.
“Brilliantly vivid. . . . The big idea is that . . . understanding the information flow in organisms might be the missing part of our scientific jigsaw puzzle. The informational approach, in Davies’s elegant and lucid exposition, is extremely promising.”
— Steven Poole

“Boundary-transcending. . . . Davies claims that life’s defining characteristics are better understood in terms of information. . . . With apologies to Charles Darwin, there is grandeur in this view of life.”
— Timo Hannay

“Fascinating. . . . This book is no lightweight holiday read you can laze through.”
— Bianca Nogrady

“Explaining one of the oldest questions—what is life?—is physicist Davies’s quest. . . . He searches for answers beyond the known, venturing into a place with no name.”
— Liz Else

"Davies’s lucid writing on this emerging scientific area is just what the pop-sci reader ordered. He is the perfect host to this admittedly dizzying journey, as he spins yarns of quantum demons, double-headed worms and everything in-between."
— Tushna Commissariat

“Davies narrates a gripping new drama in science, in which the plot is the story of life and the leading actor is information. With his characteristic blend of erudition and clarity, he brings together some of the most rapidly advancing knowledge in physics and technology to show how information controls biology. If you want to understand how the concept of life is changing, read this.”
— Andrew Briggs, University of Oxford

“This is one of the most exciting books I have read in years. Davies celebrates a significant anniversary with a demonically brilliant investigation of a fundamental question that only the very latest science and philosophy can deal with. Now we have a view from the master that's as thrilling as it is satisfying. Superb.”
— Robyn Williams

“Davies takes us on a fascinating tour of what is known about what life is. Along the way he speculates interestingly about what may become known. His theme, drawn from Darwin, Schrödinger, Turing, Gödel, Shannon, and von Neumann, is that what separates life from non-life is *information.* But how? Exploring that question illuminates biology by revealing its deep roots in physics, mathematics, and computer science.”
— David Deutsch

“In this characteristically clearly written and engaging book, ranging from physics to biology and evolutionary theory to neuroscience, Davies strongly makes the case that at its core, life is about information flows.”
— George F.R. Ellis, University of Cape Town

“Davies is a courageous explorer of the boundaries of what we can know about our world. This book makes his explorations available to all who enjoy pushing those boundaries. Written with a light entertaining touch, even the most abstruse science acquires the clarity of exposition for which the author is justly renowned.”
— Denis Noble, University of Oxford

“A tour-de-force. . . . The Demon in the Machine is simultaneously rigorous, state-of-the-art, and highly readable—very hard to put down.”
— Michael Levin, Allen Discovery Center at Tufts University

“Davies always probes the deepest questions in science. Here, addressing the deepest of all—Schrödinger’s What is Life?—he tells us what life is: matter plus information—beyond the laws of physics, but compatible with them. To elaborate this thesis, he deploys his trademark talent: getting to the heart of the most abstruse and technical aspects of science (biology as well as physics), without jargon and with down-to-earth analogies.”
— Michael Berry, HH Wills Physics Laboratory

“This creative demon shadows DNA and the promise of quantum computing, answering some basic questions. What is consciousness, why is life so good at predicting where it might go next? The bridge connecting fundamental physics, biology, and the most advanced labs of computation is what Davies calls information patterns. He shows how it organizes for top-down creativity, and thereby holds off the grim reaper of entropy. With striking insight, and metaphors that illuminate the landscape of science today, Davies once again becomes our guide to the near future.”
— Charles Jencks, author of "The Garden of Cosmic Speculation”

“The Demon in the Machine encompasses some of the most intriguing and unsolved mysteries of the universe: the existence of an arrow of time imprinted on the cosmos, and the emergence of life itself. Davies's crisp but rich narrative succeeds in untangling various highly complex ideas and processes, while fluently and intelligently setting out its own arrow of argument.”
— Mikhail Prokopenko, University of Sydney

"This work analyzes the properties of life from the perspective of atomic physics, arguing that the very nature of living things allows them to defy the second fundamental law of physics: namely, that there is a 'tendency towards degeneration and disorder.'... Along with treating the question 'What is life?' this book explains the fundamental principles of quantum physics, making a very complex subject more understandable."
— J. S. Schwartz, emeritus, CUNY College of Staten Island

"This book is really about whether a physicist can define what life is, and the living systems that are far from equilibrium, yet maintain high-order...It’s one of those books where you read a few pages, then you lean back and think and go, 'Oh, I hadn’t thought of it that way.'"
— Jim Al-Khalili

"Davies offers a similar message . . . : information, like energy, has the ability to animate matter. ‘In each and every one of us lies a message,’ writes Davies. ‘It is inscribed in an ancient code, its beginnings lost in the mists of time. Decrypted, the message contains instructions on how to make a human being. Nobody wrote the message; nobody invented the code. They came into existence spontaneously.’"
— Daily Galaxy

"Davies is struck by the way living organisms consistently resist the ravages of entropy that all forms of inanimate matter are subject to and argues that there must be some non-physical principle allowing living matter to defy the Second Law of Thermodynamics. This non-physical principle is information. Throughout the book, Davies explores all the different ways that information is an essential component of biological processes, especially at the cellular and molecular levels."
— ESSSAT News & Reviews

"For Davies, life is a data processing system. That is his demon from the machine. It is one of the books where you read a couple of pages; you then lean back and go and think, 'Oh, I had not thought of it like that.'"
— Penn Book Center

"The Demon in the Machine will have broad appeal. Experts looking to make their way from disciplinary silos, and better understand the promise of scientific thinking as it relates to information, will find what they are looking for. At the same time, novices who want to better understand the current state of science will be aptly rewarded."
— Jeremy Kirby and Quincy McCabe