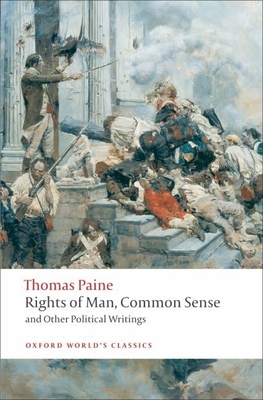 
Available to Order - Usually Arrives in Our Store in 4 to 7 Days
Thomas Paine was the first international revolutionary. His Common Sense (1776) was the most widely read pamphlet of the American Revolution--and his Rights of Man (1791-2), the most famous defense of the French Revolution, sent out a clarion call for revolution throughout the world. Paine
paid the price for his principles: he was outlawed in Britain, narrowly escaped execution in France, and was vilified as an atheist and a Jacobin on his return to America.
This new edition contains the complete texts of both Rights of Man and Common Sense, as well as six other powerfully political writings--American Crisis I, American Crisis XIII, Agrarian Justice, Letter to Jefferson, Letter Addressed to the Addressers on the Late Proclamation, and Dissertation on
the First Principles of Government--all of which illustrate why Paine's ideas still resonate in the modern welfare states of today. About the Series: For over 100 years Oxford World's Classics has made available the broadest spectrum of literature from around the globe. Each affordable volume reflects Oxford's commitment to scholarship, providing the most accurate text plus a wealth of other valuable features, including expert
introductions by leading authorities, voluminous notes to clarify the text, up-to-date bibliographies for further study, and much more.