Wounded: A New History of the Western Front in World War I (Hardcover) 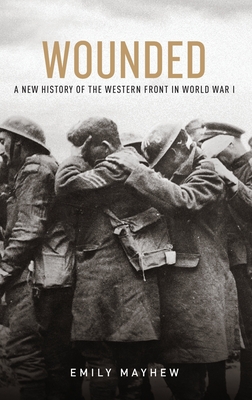 By Emily Mayhew
Please email or write store for pricing and availability information.
Special Request - May Not Be Available

The number of soldiers wounded in World War I is, in itself, devastating: over 21 million military wounded, and nearly 10 million killed. On the battlefield, the injuries were shocking, unlike anything those in the medical field had ever witnessed. The bullets hit fast and hard, went deep and took bits of dirty uniform and airborne soil particles in with them. Soldier after soldier came in with the most dreaded kinds of casualty: awful, deep, ragged wounds to their heads, faces and abdomens. And yet the medical personnel faced with these unimaginable injuries adapted with amazing aptitude, thinking and reacting on their feet to save millions of lives.
In Wounded, Emily Mayhew tells the history of the Western Front from a new perspective: the medical network that arose seemingly overnight to help sick and injured soldiers. These men and women pulled injured troops from the hellscape of trench, shell crater, and no man's land, transported them to the rear, and treated them for everything from foot rot to poison gas, venereal disease to traumatic amputation from exploding shells. Drawing on hundreds of letters and diary entries, Mayhew allows readers to peer over the shoulder of the stretcher bearer who jumped into a trench and tried unsuccessfully to get a tightly packed line of soldiers out of the way, only to find that they were all dead. She takes us into dugouts where rescue teams awoke to dirt thrown on their faces by scores of terrified moles, digging frantically to escape the earth-shaking shellfire. Mayhew moves her account along the route followed by wounded men, from stretcher to aid station, from jolting ambulance to crowded operating tent, from railway station to the ship home, exploring actual cases of casualties who recorded their experiences.
Both comprehensive and intimate, this groundbreaking book captures an often neglected aspect of the soldier's world and a transformative moment in military and medical history.