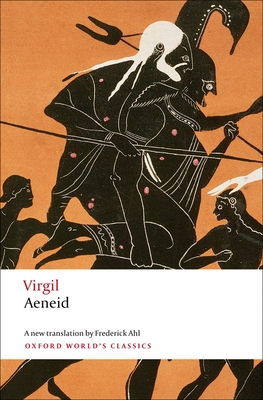 
Available to Order - Usually Arrives in Our Store in 4 to 7 Days
Frederick Ahl's new translation captures the excitement, poetic energy, and intellectual force of the original in a way that has never been done before. Ahl has used a version of Virgil's ancient hexameter, a swift-moving six-beat line varying between twelve and seventeen syllables, to
reproduce the original poetry in a thrillingly accurate and engaging style. This is an Aeneid that the first-time reader can grasp and enjoy, and whose rendition of Virgil's subtleties of thought and language will enthrall those already familiar with the epic. Unlike most translators, Ahl has chosen
to retain Virgil's word-play, the puns and anagrams and other instances of the poet's ebullient wit. Like Shakespeare and the Greek tragedians, Virgil grasped that humor and earnestness are not mutually exclusive in art any more than they are in life. One should read the Aeneid not in solemn
homage, but for enjoyment. Enhanced by Elaine Fantham's Introduction, Ahl's comprehensive notes and an invaluable indexed glossary, this lively new translation brings readers closer to the original and the myriad enjoyments to be found there. About the Series: For over 100 years Oxford World's Classics has made available the broadest spectrum of literature from around the globe. Each affordable volume reflects Oxford's commitment to scholarship, providing the most accurate text plus a wealth of other valuable features, including expert
introductions by leading authorities, voluminous notes to clarify the text, up-to-date bibliographies for further study, and much more.

Frederick Ahl is a professor of classics and comparative literature at Cornell University. His books include Sophocles' Oedipus, Seneca's Phaedra, Lucan: An Introduction, and Metaformations: Soundplay and Wordplay in Ovid and Other Classical Poets. He lives in Ithaca, NY.