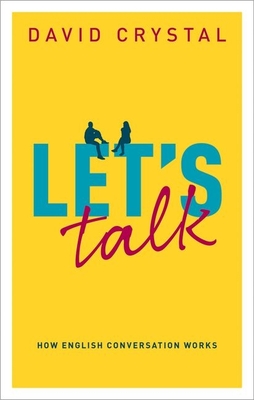 
Available to Order - Usually Arrives in Our Store in 4 to 7 Days
Banter, chit-chat, gossip, natter, tete-a-tete: these are just a few of the terms for the varied ways in which we interact with one another through conversation. David Crystal explores the factors that motivate so many different kinds of talk and reveals the rules we use unconsciously, even in
the most routine exchanges of everyday conversation. We tend to think of conversation as something spontaneous, instinctive, habitual. It has been described as an art, as a game, sometimes even as a battle. Whichever metaphor we use, most people are unaware of what the rules are, how they work, and
how we can bend and break them when circumstances warrant it.

David Crystal is known throughout the world as a writer, editor, lecturer, and broadcaster on language. He has published extensively on the history and development of English, including Begat: The King James Bible and the English Language (2010), The Story of English in 100 Words (2011), Spell ItOut: The Singular Story of English Spelling (2012), Wordsmiths and Warriors: The English-Language Tourist's Guide to Britain (with Hilary Crystal, 2013), The Oxford Dictionary of Original Shakespearean Pronunciation (2016), and The Story of Be: A Verb's-Eye View of the English Language (2017).