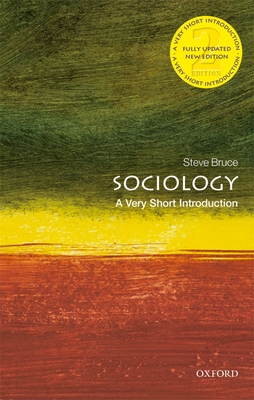 
Available to Order - Usually Arrives in Our Store in 4 to 7 Days
Drawing on studies of social class, crime and deviance, education, work in bureaucracies and changes in religious and political organizations, this Very Short Introduction explores the tension between the individual's place in society and society's role in shaping the individual, and demonstrates the value of sociology for understanding the modern world. In this new edition Steve Bruce discusses the continuing arguments for social egalitarianism, considering issues such as gay marriage, women in combat roles, and the 2010 Equality Act to debunk contemporary arguments against parity. As gender divisions are increasingly questioned he looks ahead to the likely consequences of this for society. Delving into the theory of sociology, Bruce also argues that the habit of dividing sociology into apparently competing 'sects' is misleading, and shows how a new understanding of the disciplinary background of many of the most famous theorists, which shows that much social theory is actually philosophy or literary theory, will prove useful to today's sociologists. ABOUT THE SERIES: The Very Short Introductions series from Oxford University Press contains hundreds of titles in almost every subject area. These pocket-sized books are the perfect way to get ahead in a new subject quickly. Our expert authors combine facts, analysis, perspective, new ideas, and enthusiasm to make interesting and challenging topics highly readable.

Steve Bruce, Professor of Sociology, University of Aberdeen Steve Bruce is an internationally renowned sociologist of religion. He taught at The Queen's University, Belfast, from 1978 to 1991 and since 2001 he has been Professor of Sociology at the University of Aberdeen. In 2003 he was elected a Fellow of the British Academy and in 2005 he was elected a Fellow of the Royal Society of Edinburgh. Steve Bruce is the author of a number of books, including Secular Beats Spiritual (OUP, 2017), Bryan Wilson's Religion in Secular Society: Fifty Years On (OUP 2016), and Scottish Gods: Religion in Modern Scotland (Edinburgh University Press, 2014).