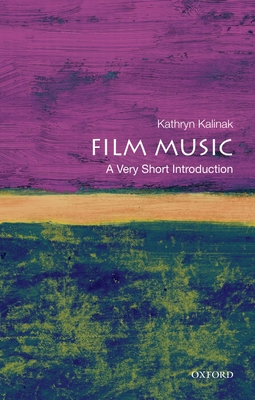 By Kathryn Kalinak
$11.95
Available to Order - Usually Arrives in Our Store in 4 to 7 Days

Film music is as old as cinema itself. Years before synchronized sound became the norm, projected moving images were shown to musical accompaniment, whether performed by a lone piano player or a hundred-piece orchestra. Today film music has become its own industry, indispensable to the marketability of movies around the world.
Film Music: A Very Short Introduction is a compact, lucid, and thoroughly engaging overview written by one of the leading authorities on the subject. After opening with a fascinating analysis of the music from a key sequence in Quentin Tarantino's Reservoir Dogs, Kathryn Kalinak introduces readers not only to important composers and musical styles but also to modern theoretical concepts about how and why film music works. Throughout the book she embraces a global perspective, examining film music in Asia and the Middle East as well as in Europe and the United States. Key collaborations between directors and composers--Alfred Hitchcock and Bernard Herrmann, Akira Kurosawa and Fumio Hayasaka, Federico Fellini and Nino Rota, to name only a few--come under scrutiny, as do the oft-neglected practices of the silent film era. She also explores differences between original film scores and compilation soundtracks that cull music from pre-existing sources.
As Kalinak points out, film music can do many things, from establishing mood and setting to clarifying plot points and creating emotions that are only dimly realized in the images. This book illuminates the many ways it accomplishes those tasks and will have its readers thinking a bit more deeply and critically the next time they sit in a darkened movie theater and music suddenly swells as the action unfolds onscreen.
About the Series: Combining authority with wit, accessibility, and style, Very Short Introductions offer an introduction to some of life's most interesting topics. Written by experts for the newcomer, they demonstrate the finest contemporary thinking about the central problems and issues in hundreds of key topics, from philosophy to Freud, quantum theory to Islam.

Kathryn Kalinak is Professor of English and Film Studies at Rhode Island College. Her extensive writing on film music includes numerous articles as well as the books Settling the Score: Music in the Classical Hollywood Film and How the West was Sung: Music in the Westerns of John Ford.