Life, Sex and Ideas: The Good Life Without God (Paperback) 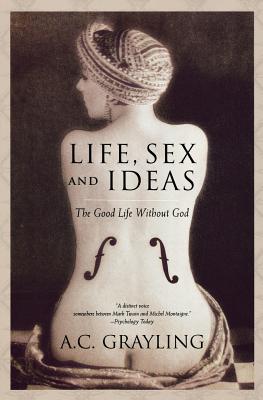 Life, Sex and Ideas: The Good Life Without God (Paperback)

By A. C. Grayling


Available to Order - Usually Arrives in Our Store in 4 to 7 Days
"A distinctive voice somewhere between Mark Twain and Michel Montaigne" is how Psychology Today described A.C. Grayling. In Life, Sex, and Ideas: The Good Life Without God, readers have the pleasure of hearing this distinctive voice address some of the most serious topics in philosophy--and in our daily lives--including reflections on guns, anger, conflict, war; monsters, madness, decay; liberty, justice, utopia; suicide, loss, and remembrance.
A civilized society, says Grayling, is one which never ceases having a discussion with itself about what human life should best be. In this book, Grayling adds to this discussion a series of short informal essays about ethics, ideas, and culture. A recurring theme is religion, of which he writes "there is no greater social evil." He argues, for instance, that liberal education is better than religion for inculcating moral values. "Education in literature, history, and appreciation of the arts," he says, "opens the possibility for us to live more reflectively and knowledgeably, especially about the nature and variety of human experience. That in turn increases our capacity for understanding others better, so that we can treat them with respect and sympathy, however different their outlook on life." Thought provoking rather than definitive, these essays don't tell readers what to think, but only note what has been thought about how it is best to live.
A person who does not think about life, the author reminds us, is like a stranger mapless in a foreign land. These brief and suggestive essays offer us the outlines of a map, with avenues of thought that are a pleasure to wander down.

A.C. Grayling is a British literary journalist and university professor of philosophy, who contributes the weekly column The Reason of Things to The London Times and writes frequently for Financial Times and The New York Review of Books. He is a Reader in Philosophy at Birbeck College, Universityof London, and Supernumerary Fellow of St. Anne's College, Oxford. His books include Meditations for the Humanist: Ethics for a Secular Age.