Flat Broke with Children: Women in the Age of Welfare Reform (Paperback) 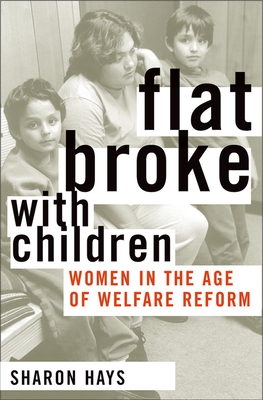 Flat Broke with Children: Women in the Age of Welfare Reform (Paperback)


Available to Order - Usually Arrives in Our Store in 4 to 7 Days
Hailed as a great success, welfare reform resulted in a dramatic decline in the welfare rolls--from 4.4 million families in 1996 to 2 million in 2003. But what does this success look like to the welfare mothers and welfare caseworkers who experienced it? In Flat Broke With Children, Sharon
Hays tells us the story of welfare reform from inside the welfare office and inside the lives of welfare mothers, describing the challenges that welfare recipients face in managing their work, their families, and the rules and regulations of welfare reform.
Welfare reform, experienced on the ground, is not a rosy picture. The majority of adult welfare clients are mothers--over 90 percent--and the time limits imposed by welfare reform throw millions of these mostly unmarried, desperate women into the labor market, where they must accept low
wages, the most menial work, the poorest hours, with no benefits, and little flexibility. Hays provides a vivid portrait of their lives--debunking many of the stereotypes we have of welfare recipients--but she also steps back to explore what welfare reform reveals about the meaning of work and
family life in our society. In particular, she argues that an inherent contradiction lies at the heart of welfare policy, which emphasizes traditional family values even as its ethic of personal responsibility requires women to work and leave their children in childcare or at home alone all day
long.
Hays devoted three years to visiting welfare clients and two welfare offices, one in a medium-sized town in the Southeast, another in a large, metropolitan area in the West. Drawing on this hands-on research, Flat Broke With Children is the first book to explore the impact of welfare reform
on motherhood, marriage, and work in women's lives, and the first book to offer us a portrait of how welfare reform plays out in thousands of local welfare offices and in millions of homes across the nation.

Sharon Hays is Barbra Streisand Professor in Contemporary Gender Studies and Professor of Sociology at the University of Southern California. The author of The Cultural Contradictions of Motherhood, she has been interviewed for publications such as The Washington Post, Los Angeles Times, Parenting, Working Mother Magazine, and U.S. News and World Report.