The South vs. The South: How Anti-Confederate Southerners Shaped the Course of the Civil War (Paperback) 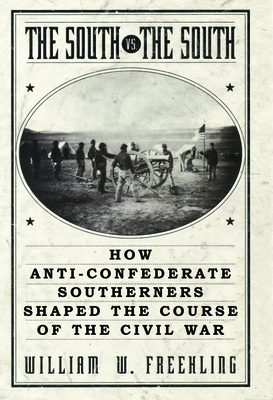 The South vs. The South: How Anti-Confederate Southerners Shaped the Course of the Civil War (Paperback)


Available to Order - Usually Arrives in Our Store in 4 to 7 Days
Why did the Confederacy lose the Civil War? Most historians point to the larger number of Union troops, for example, or the North's greater industrial might. Now, in The South Vs. the South, one of America's leading authorities on the Civil War era offers an entirely new answer to this
question.
William Freehling argues that anti-Confederate Southerners--specifically, border state whites and southern blacks--helped cost the Confederacy the war. White men in such border states as Missouri, Kentucky, and Maryland, Freehling points out, were divided in their loyalties--but far more
joined the Union army (or simply stayed home) than marched off in Confederate gray. If they had enlisted as rebel troops in the same proportion as white men did farther south, their numbers would have offset all the Confederate casualties during four years of war. In addition, when those states
stayed loyal, the vast majority of the South's urban population and industrial capacity remained in Union hands. And many forget, Freehling writes, that the slaves' own decisions led to a series of white decisions (culminating in the Emancipation Proclamation) that turned federal forces into an army
of liberation, depriving the South of labor and adding essential troops to the blue ranks.
Whether revising our conception of slavery or of Abraham Lincoln, or establishing the antecedents of Martin Luther King, or analyzing Union military strategy, or uncovering new meanings in what is arguably America's greatest piece of sculpture, Augustus St.-Gaudens' Shaw Memorial, Freehling
writes with piercing insight and rhetorical verve. Concise and provocative, The South Vs. the South will forever change the way we view the Civil War.

William W. Freehling is Professor of History and Otis A. Singletary Chair in Humanities at the University of Kentucky, and is the author of The Road to Disunion, Volume I: Disunionists at Bay, 1776-1854, which won the Owsley Prize. He lives near Lexington, Kentucky.