Chicano Folklore: A Guide to the Folktales, Traditions, Rituals and Religious Practices of Mexican Americans (Paperback) 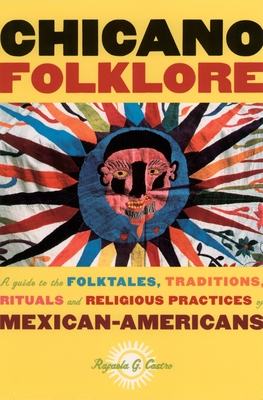 Chicano Folklore: A Guide to the Folktales, Traditions, Rituals and Religious Practices of Mexican Americans (Paperback)


Available to Order - Usually Arrives in Our Store in 4 to 7 Days
Did you know that barrio is a term for a Chicano neighborhood, and that some of the oldest barrios can be found in major U.S. cities, like Los Angeles, Chicago, El Paso, and San Antonio? Or that menudo is actually a soup-type dish made with tripe, the stomach lining of a cow, and typically
eaten early in the morning after big holiday celebrations to cure a hangover?
Chicano Folklore is replete with such interesting and often surprising facts about Mexican American culture. Even before the United States-Mexican War in 1848, when 80,000 Spanish-Mexican-Indian people suddenly became inhabitants of the United States, people of Spanish and Mexican descent had a
rich and unique culture in what is now the American southwest. Understanding Chicano folklore, or the customs, rituals, and traditional cultural forms that Mexican Americans share, is extremely significant to comprehending the Chicano experience. Chicano Folklore is the first reference book to focus
wholly on this subject. From burrito (literally little burro or little donkey) to zoot suit (a style of suit worn by Mexican Americans, African Americans, and Filipino Americans during the 1930s and 1940s), the dictionary's more than 225 in-depth passages thoroughly explain the meaning and
background of each cultural term. We learn about the music, religious practices, food, and key historical and mythical figures that make Chicano folklore so vibrant.
The detailed, immensely informative passages of Chicano Folklore will entertain and educate anyone interested in understanding Chicano culture and the colorful impact it has had on America as a whole.