Who Set You Flowin'?: The African-American Migration Narrative (Race and American Culture) (Paperback) 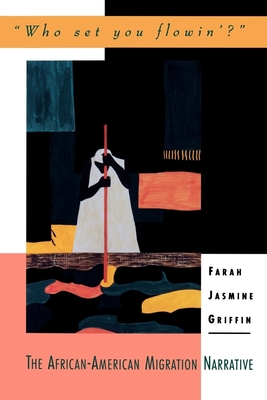 Who Set You Flowin'?: The African-American Migration Narrative (Race and American Culture) (Paperback)

Twentieth-century America has witnessed the most widespread and sustained movement of African-Americans from the South to urban centers in the North. Who Set You Flowin'? examines the impact of this dislocation and urbanization, identifying the resulting Migration Narratives as a major genre in African-American cultural production. Griffin takes an interdisciplinary approach with readings of several literary texts, migrant correspondence, painting, photography, rap music, blues, and rhythm and blues. From these various sources Griffin isolates the tropes of Ancestor, Stranger, and Safe Space, which, though common to all Migration Narratives, vary in their portrayal. She argues that the emergence of a dominant portrayal of these tropes is the product of the historical and political moment, often challenged by alternative portrayals in other texts or artistic forms, as well as intra-textually. Richard Wright's bleak, yet cosmopolitan portraits were countered by Dorothy West's
longing for Black Southern communities. Ralph Ellison, while continuing Wright's vision, reexamined the significance of Black Southern culture. Griffin concludes with Toni Morrison embracing the South as a site of African-American history and culture, a place to be redeemed.

Farah Jasmine Griffin is Assistant Professor of English at the University of Pennsylvania. She lives and writes in Philadelphia.