Only the Ball Was White: A History of Legendary Black Players and All-Black Professional Teams (Paperback) 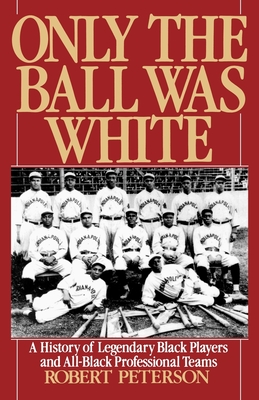 Only the Ball Was White: A History of Legendary Black Players and All-Black Professional Teams (Paperback)


On Our Shelves Now
Early in the 1920s, the New York Giants sent a scout to watch a young Cuban play for Foster's American Giants, a baseball club in the Negro Leagues. During one at-bat this talented slugger lined a ball so hard that the rightfielder was able to play it off the top of the fence and throw Christobel Torrienti out at first base. The scout liked what he saw, but was disappointed in the player's appearance. He was a light brown, recalled one of Torrienti's teammates, and would have gone up to the major leagues, but he had real rough hair. Such was life behind the color line, the unofficial boundary that prevented hundreds of star-quality athletes from playing big-league baseball. When Only the Ball Was White was first published in 1970, Satchel Paige had not yet been inducted into the Hall of Fame and there was a general ignorance even among sports enthusiasts of the rich tradition of the Negro Leagues. Few knew that during the 1930s and '40s outstanding black teams were playing regularly in Yankee Stadium and Brooklyn's Ebbets Field. And names like Cool Papa Bell, Rube Foster, Judy Johnson, Biz Mackey, and Buck Leonard would bring no flash of smiling recognition to the fan's face, even though many of these men could easily have played alongside Ty Cobb, Walter Johnson, Hack Wilson, Lou Gehrig--and shattered their records in the process. Many baseball pundits now believe, for example, that had Josh Gibson played in the major leagues, he would have surpassed Babe Ruth's 714 home runs before Hank Aaron had even hit his first. And the great Dizzy Dean acknowledged that the best pitcher he had ever seen was not Lefty Grove or Carl Hubbell, but rather old Satchel Paige, that big lanky colored boy. In Only the Ball Was White, Robert Peterson tells the forgotten story of these excluded ballplayers, and gives them the recognition they were so long denied. Reconstructing the old Negro Leagues from contemporary sports publications, accounts of games in the black press, and through interviews with the men who actually played the game, Peterson brings to life the fascinating period that stretched from shortly after the Civil War to the signing of Jackie Robinson in 1947. We watch as the New York Black Yankees and the Philadelphia Crawfords take the field, look on as the East-West All-Star lineups are announced, and listen as the players themselves tell of the struggle and glory that was black baseball. In addition to these vivid accounts, Peterson includes yearly Negro League standings and an all-time register of players and officials, making the book a treasure trove of baseball information and lore. A monumental and poignant book, Only the Ball Was White reminds us that what was often considered the Golden Age of baseball was also the era of Jim Crow. It is a book that must be read by anyone hoping not only to understand the story of baseball, but the story of America.

Robert W. Peterson is the author of Cages to Jump Shots (Oxford, 1990) and The Boy Scouts: An American Adventure. He has written for Sports Illustrated, The New York Times Magazine, Sport, Boys' Life, and many other magazines.