Puerto Rico: What Everyone Needs to Know(r) (Hardcover) 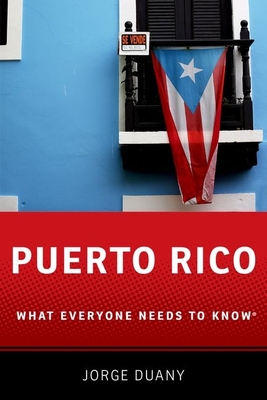 By Jorge Duany
Please email or write store for pricing and availability information.
Special Request - May Not Be Available

Acquired by the United States from Spain in 1898, Puerto Rico has a peculiar status among Latin American and Caribbean countries. As a Commonwealth, the island enjoys limited autonomy over local matters, but the U.S. has dominated it militarily, politically, and economically for much of its recent history. Though they are U.S. citizens, Puerto Ricans do not have their own voting representatives in Congress and cannot vote in presidential elections (although they are able to participate in the primaries). The island's status is a topic of perennial debate, both within and beyond its shores. In recent months its colossal public debt has sparked an economic crisis that has catapulted it onto the national stage and intensified the exodus to the U.S., bringing to the fore many of the unresolved remnants of its colonial history. Puerto Rico: What Everyone Needs to Know(R) provides a succinct, authoritative introduction to the Island's rich history, culture, politics, and economy. The book begins with a historical overview of Puerto Rico during the Spanish colonial period (1493-1898). It then focuses on the first five decades of the U.S. colonial regime, particularly its efforts to control local, political, and economic institutions as well as to "Americanize" the Island's culture and language. Jorge Duany delves into the demographic, economic, political, and cultural features of contemporary Puerto Rico-the inner workings of the Commonwealth government and the island's relationship to the United States. Lastly, the book explores the massive population displacement that has characterized Puerto Rico since the mid-20th century. Despite their ongoing colonial dilemma, Jorge Duany argues that Puerto Ricans display a strong national identity as a Spanish-speaking, Afro-Hispanic-Caribbean nation. While a popular tourist destination, few beyond its shores are familiar with its complex history and diverse culture. Duany takes on the task of educating readers on the most important facets of the unique, troubled, but much beloved isla del encanto.

Jorge Duany is the Director of the Cuban Research Institute and Professor of Anthropology at Florida International University. He has published extensively on migration, ethnicity, race, nationalism, and transnationalism in the Hispanic Caribbean and the United States. He is the author, coauthor, or editor of 20 books, including several works about Puerto Rico.