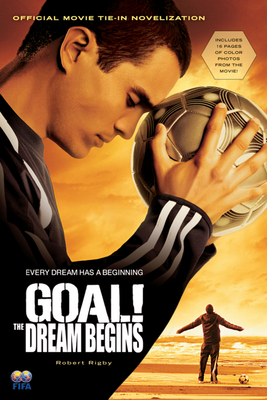 
Available to Order - Usually Arrives in Our Store in 4 to 7 Days
While growing up on the tough streets of Los Angeles, Santiago's greatest joy is playing soccer. So it is a dream come true when a British scout sees him playing in the park and offers him a trial with one of England's top Premiership clubs. Determined to succeed, Santiago leaves behind his struggling family and his modest home, and flies halfway around the world to give it his best shot.

But it's not smooth sailing when Santiago arrives in northern England. Team practices are intense, and in this place where people live and breathe the sport, many seem eager to find fault with the new Latino player from L.A. The pressure even spurs Santiago to keep a secret that could sabotage his performance. There is no doubt that Santiago has skill, flair, and dedication. But does he have the stamina he will need for the English game?

Based on the action-packed movie, Goal! is a gripping tale of trial and tribulation set against the backdrop of the world's most popular and exciting sport.

ROBERT RIGBY is a playwright, novelist, and television scriptwriter. His award-winning work with youth theater companies has been staged in Britain, Europe, the United States, and Africa. He is also the writer of the long-running BBC children’s drama series Byker Grove.