Sorcery And Cecelia Or The Enchanted Chocolate Pot: Being the Correspondence of Two Young Ladies of Quality Regarding Various Magical Scandals in London and the Country (Paperback) 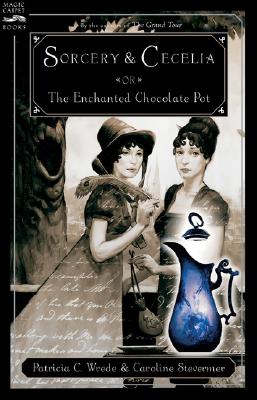 Sorcery And Cecelia Or The Enchanted Chocolate Pot: Being the Correspondence of Two Young Ladies of Quality Regarding Various Magical Scandals in London and the Country (Paperback)


Email or call for price. Handling fee may apply.
A great deal is happening in London this season.
For starters, there’s the witch who tried to poison Kate at Sir Hilary’s induction into the Royal College of Wizards. (Since when does hot chocolate burn a hole straight through one’s dress?!)
Then there’s Dorothea. Is it a spell that’s made her the toast of the town—or could it possibly have something to do with the charm-bag under Oliver’s bed?
And speaking of Oliver, just how long can Cecelia and Kate make excuses for him? Ever since he was turned into a tree, he hasn’t bothered to tell anyone where he is!
The girls might think it all a magical nightmare . . . if only they weren’t having so much fun.
PATRICIA C. WREDE has written many novels, including Sorcery and Cecelia or The Enchanted Chocolate Pot and The Grand Tour coauthored with Caroline Stevermer, as well as the four books in her own series, the Enchanted Forest Chronicles. She lives near Minneapolis, Minnesota.

"Witty, light, and funny . . . Regency romance as well as fantasy fans are going to line up for it."--The Bulletin

"Older girls who have outgrown Harry Potter will like their slightly rebellious natures, the magical twists and turns, and especially the humor and quick pace."--The San Diego Union-Tribune