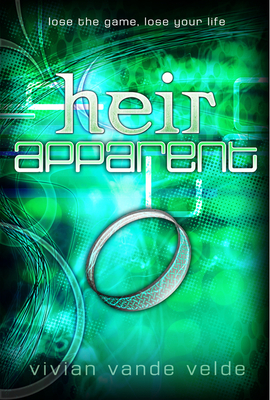 By Vivian Vande Velde
$8.99
On Our Shelves Now

"Lovers of fantasy and gamers in general will appreciate this medieval adventure through virtual reality. Vivid exploration gives way to white-knuckled tension as stakes mount and pressure rises on Giannine to beat the game or die trying."

In the virtual reality game Heir Apparent, there are way too many ways to get killed--and Giannine seems to be finding them all. Which is a darn shame, because unless she can get the magic ring, locate the stolen treasure, answer the dwarf's dumb riddles, impress the head-chopping statue, charm the army of ghosts, fend off the barbarians, and defeat the man-eating dragon, she'll never win.

And she has to, because losing means she'll die--for real this time.

Vivian Vande Velde has written many books for teen and middle grade readers, including Heir Apparent, User Unfriendly, All Hallow's Eve: 13 Stories, Three Good Deeds, Now You See It ..., and the Edgar Award–winning Never Trust a Dead Man. She lives in Rochester, New York. Visit her website at www.vivianvandevelde.com.

"A stylish tale [that] addresses both fantasy gaming and censorship."
—The New York Times Book Review