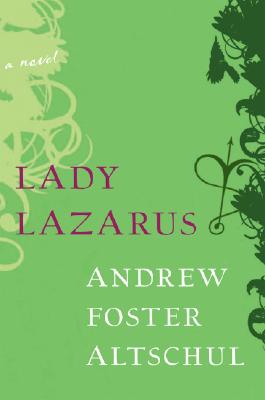 The novel is narrated by both Calliope and her obsessive biographer, who follows her from her silent childhood to her first tortured, manic public statements about her father; from her highly publicized publication of a book of poetry to her mysterious disappearance; from her reappearance as the mute leader of a cultlike brigade known as The Muse to her spectacular showdown with the biographer.

A disturbing and razor-sharp meditation on twenty-first-century celebrity culture, Lady Lazarus is also a funny and moving story about the age-old question of the nature of the self.

ANDREW FOSTER ALTSCHUL is a Jones Lecturer and former Wallace Stegner Fellow at Stanford University. His work has appeared in Fence, Swink, StoryQuarterly, One Story and other journals, as well as the anthologies Best New American Voices 2006 and The O. Henry Prize Stories 2007. He lives in San Francisco.

"Andrew Altschul may be shinily modern—postmodern—in every other way, but he is also that ancient thing, a born storyteller capable of breaking your heart."—Elizabeth Tallent, author of Museum Pieces

"Entertaining and surprisingly elegant... Nimble prose and an ironic but not smart-alecky stance keep this story moving along nicely... a promising start."

"Altschul playfully and humorously delivers his novel in a pseudo-documentary style while exploring the serious themes of truth, group hysteria, and the transience of human existence."--Library Journal
— Library Journal

"Lady Lazarus is a brilliant examination of the cultural pull exerted by the famous and the dead. Many ghosts haunt the pages of this gripping novel. It casts over the reader that same spell cast by the real-life stories of the talented and the doomed."
— Heidi Julavits, author of USES OF ENCHANTMENT

"Altschul is one of our great young writers, and Lady Lazarus is the proof. A poetic satire of rock and roll, and a rock and roll ode to poetry, it mirrors its heroine: smart, gorgeous, and funny as hell."
— Andrew Sean Greer, author of THE CONFESSIONS OF MAX TIVOLI

"A sort of Gen X answer to Don DeLillo's boomer epic Underworld; it uses alt rock as a springboard to address all of the human condition."

"At last, a term for the self-destructive celebrities that so fascinate (and dominate) American culture: Death Artists."

"Lady Lazarus is fun, sure, but Altschul is serious as a heart attack... A certain Seattle band is only the starting point of this smart, funny, breath-taking novel about celebrity, literature, and the elusive truth."

"Altschul is one smart cookie and a fabulist of no little talent. Lady Lazarus is ambitious, virtuostic, epic, and worthy of the oohs and ahhs of literate rock fans... Maybe tell them it's the Quadrophenia of books?"

"Some of the smartest, insightful, and flat-out funny writing about rock and roll celebrity since Neal Pollack's Never Mind the Pollacks."

"If you're a fan of postmodern fiction... Altschul's debut makes an excellent addition to the canon. You should read this book."

"In these pages Andrew Altschul conducts the wildest possible love affair with style. These pages are lit by the most seditious literary cunning... Andrew Altschul may be shinily modern - postmodern - in every other way, but he is also that ancient thing, a born storyteller capable of breaking your heart."

"Lady Lazarus takes the idea of celebrity and turns it upside down... This debut novel reads like a rock biography but ends up questioning the importance of art in a postmodern world. "