Traitor to the Throne (Rebel of the Sands #2) (Paperback) 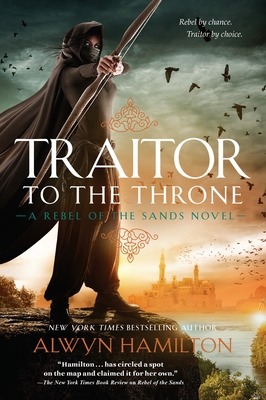 Traitor to the Throne (Rebel of the Sands #2) (Paperback)


On Our Shelves Now
The sizzling, un-put-downable sequel to the New York Times bestselling Rebel of the Sands, by the Goodreads Choice Awards Best Debut Author of 2016!

Mere months ago, gunslinger Amani Al-Hiza fled her dead-end hometown on the back of a mythical horse with the mysterious foreigner Jin, seeking only her own freedom. Now she's fighting to liberate the entire desert nation of Miraji from a bloodthirsty sultan who slew his own father to capture the throne.

When Amani finds herself thrust into the epicenter of the regime—the Sultan's palace—she's determined to bring the tyrant down. Desperate to uncover the Sultan's secrets by spying on his court, she tries to forget that Jin disappeared just as she was getting closest to him, and that she's a prisoner of the enemy. But the longer she remains, the more she questions whether the Sultan is really the villain she's been told he is, and who’s the real traitor to her sun-bleached, magic-filled homeland.

Forget everything you thought you knew about Miraji, about the rebellion, about djinni and Jin and the Blue-Eyed Bandit. In Traitor to the Throne, the only certainty is that everything will change.

"A robust and satisfying sequel, Traitor to the Throne ranks at the top with the novels of Morgan Rhodes, Rae Carson, and Leigh Bardugo." --VOYA

Alwyn Hamilton was born in Toronto and spent her childhood bouncing between Europe and Canada until her parents settled in France. She grew up in a small town there, which might have compelled her to burst randomly into the opening song from Beauty and the Beast were it not for her total tone-deafness. She instead attempted to read and write her way to new places and developed a weakness for fantasy and cross-dressing heroines. She left France for Cambridge University to study History of Art at King’s College, and then to London where she became indentured to an auction house. She has a bad habit of acquiring more hardcovers than is smart for someone who moves house quite so often. Follow her at @AlwynFJH.

PRAISE FOR Traitor to the Throne:

*"[Traitor builds] to a crescendo of heart-pounding—and heartbreaking—climaxes that will leave readers sobbing and desperate for the next volume."--Kirkus Reviews, starred review

"[Traitor] is full of compelling twists and turns, and the ending will leave readers highly anticipating the final volume in theRebel of the Sands trilogy."--Booklist

"A robust and satisfying sequel, Traitor to the Throne ranks at the top with the novels of Morgan Rhodes, Rae Carson, and Leigh Bardugo…Hamilton’s storytelling is rich and the characters well developed." --VOYA

PRAISE FOR Rebel of the Sands:

“Debut author Hamilton combines elements of Western and Middle Eastern civilization and lore with her own mythology, crafting an enticing, full-bodied story . . .  successfully mingles romance with thrilling stakes, and hints at a welcome sequel.” --Publishers Weekly

“This atmospheric fantasy combines magic, mythology, and the Wild West to create a riveting tale...an exciting, romantic adventure that is unique and all its own.” --Starred Review, Booklist