The Song of Hartgrove Hall: A Novel (Paperback) 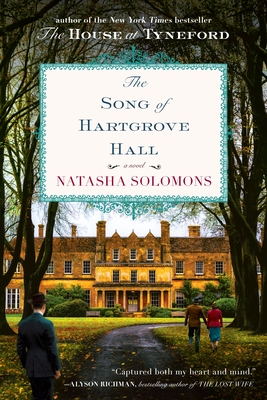 By Natasha Solomons
$16.00
Available to Order - Usually Arrives in Our Store in 4 to 7 Days

“Three brothers return to Hartgrove Hall after World War II to find their beloved home hard-used by military forces and greatly in need of repair. Their efforts are complicated by the introduction of the oldest brother's fiance, Edie Rose, whose beautiful voice instilled hope in the British citizenry during the darkness of war. Soon, all three brothers are in love with Edie, but only one will ultimately win her hand. Fast-forward to present times and Edie has just passed away, leaving Fox reeling from his wife's death and mired in grief. Called upon to babysit his four-year-old grandson one day, he discovers that the lad is a prodigy at the piano with an uncanny ability to impart through his grandfather's musical compositions the emotions Fox felt when writing them. This novel is a joy to read and fills readers with a hope of restoration in the face of loss.”
— Vicki Burger, Wind City Books, Casper, WY

From the New York Times bestselling author of The House at Tyneford comes a captivating 1940s English country novel of a love triangle, family obligations, and rediscovering joy in the face of grief—perfect for fans of Kate Morton and Downton Abbey.

New Year’s Eve, Dorset, England, 1946. Candles flicker, a gramophone scratches out a tune as guests dance and sip champagne—for one night Hartgrove Hall relives better days. Harry Fox-Talbot and his brothers have returned from World War II determined to save their once grand home from ruin. But the arrival of beautiful Jewish wartime singer Edie Rose tangles the threads of love and duty, and leads to a devastating betrayal.

Fifty years later, now a celebrated composer, Fox reels from the death of his adored wife, Edie. Until his connection with his four-year old grandson—a music prodigy—propels him back into life, and ultimately to confront his past. An enthralling novel about love and treachery, joy after grief, and a man forced to ask: is it ever too late to seek forgiveness?

A screenwriter and novelist, Natasha Solomons lives in Dorset, England, with her husband and young son. She is the New York Times bestselling author of The House at Tyneford, The Gallery of Vanished Husbands, and The Song of Hartgrove Hall.

“The perfect mid-winter read, especially if you’re a Downton Abbey fan....This novel spans decades, and includes a great British manor house and characters....Whether you’re already a fan or a newcomer, this story will capture your mind and heart.”—Washington Independent Review of Books

“Packed with beautiful writing and marvelously conceived characters, The Song of Hartgrove Hall moves effortlessly between the threadbare riches of England’s postwar country house society and the discordant ambitions of modern life, all bound together by a timeless love story that will break you and heal you. Natasha Solomons is a writer after my own heart.”—Beatriz Williams, author of A Hundred Summers and The Secret Life of Violet Grant

“Descriptions of the verdant British countryside, the grandeur of the manse, and Fox and Edie's devotion combine in a novel as engaging as Downton Abbey and as literary as a Brontë work.”—ShelfAwareness

“Devotees of television’s Downton Abbey will be drawn in by this novel’s historical detail and emotional story line.”—Library Journal

“Rarely does a novel capture both my heart and mind, but Natasha Solomon's new novel gripped me from the first chapter.  Written in exquisite and razor sharp prose, The Song of Hartgrove Hall explores the bonds of family, the power of music, and the very nature of what it means to leave behind a legacy.  I cannot recommend this novel strongly enough.  It read like music itself and its beautiful and haunting notes lingered long after I finished the last page.”—Alyson Richman, internationally bestselling author of The Lost Wife and The Garden of Letters

"Natasha Solomons crafts a symphony of words in this luminous novel of a young musician on the verge of great passion. From the very beginning, I was swept away in the music of the story. Brimming with the intertwined melodies of love, loss, and regained joy, The Song of Hartgrove Hall soars.”—Jessica Brockmole, author of Letters from Skye