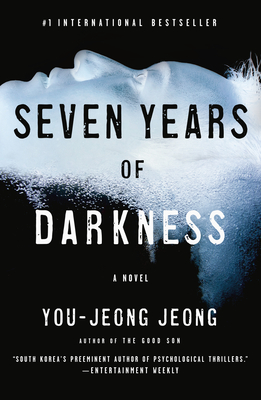 By You-Jeong Jeong
$17.00
Available to Order - Usually Arrives in Our Store in 4 to 7 Days

"You-Jeong Jeong is a certified international phenomenon . . . Genuinely surprising and ultimately satisfying . . . Seven Years of Darkness [bolsters] the case for Jeong as one among the best at writing psychological suspense." —Los Angeles Times

NAMED A MOST ANTICIPATED BOOK OF SUMMER 2020 BY CRIMEREADS, BUSTLE, and AARP.org

The truth always rises to the surface...

When a young girl is found dead in Seryong Lake, a reservoir in a remote South Korean village, the police immediately begin their investigation. At the same time, three men--Yongje, the girl's father, and two security guards at the nearby dam, each of whom has something to hide about the night of her death--find themselves in an elaborate game of cat and mouse as they race to uncover what happened to her, without revealing their own closely guarded secrets.

After a final showdown at the dam results in a mass tragedy, one of the guards is convicted of murder and sent to prison. For seven years, his son, Sowon, lives in the shadow of his father's shocking and inexplicable crime; everywhere he goes, a seemingly concerted effort to reveal his identity as the reviled mass murderer's son follows him. When he receives a package that promises to reveal at last what really happened at Seryong Lake, Sowon must confront a present danger he never knew existed.

Dark, disturbing, and full of twists and turns, Seven Years of Darkness is the riveting new novel from the internationally celebrated author of The Good Son.

You-Jeong Jeong is the award-winning author of four novels, including the #1 international bestsellers The Good Son and Seven Years of Darkness, which was named one of the top ten crime novels of 2015 by the German newspaper Die Zeit. Her novels have been published in 19 countries.

Chi-Young Kim is a translator of Korean literature into English. She was awarded the 2011 Man Asian Literary Prize for her work on Please Look After Mom by Kyung-sook Shin.

Praise for Seven Years of Darkness:

“Seven Years of Darkness promises to be just as gripping and intense [as The Good Son], and should prove once again that South Korea is the new capital of psycho-noir.” —CrimeReads

“Seven Years in Darkness is wonderfully atmospheric; the description of a night dive through an underwater village is a tour de force. The handling of the core themes of domestic violence, alcoholism and broken dreams, meanwhile, is both sensitive and hard-hitting.” —The Guardian

“You-Jeong Jeong's masterfully plotted Seven Years of Darkness presents two excellent narratives deftly woven together: a thriller inside a thriller. [Jeong] uses this nesting-doll structure to meditate on the long shadow of trauma and the elusive nature of truth, but it also serves as a clever method for heightening suspense. Jeong makes it obvious that at least one part of the story ends in tragedy, but unfolding why and how it happens reveals a multitude of shocking surprises.” —Shelf Awareness

“Eerie interludes . . . add a sense of dreamlike beauty. Each character’s motivations are examined . . . the details of which are rendered even more potent by the author's frank descriptions. Missing and dead girls are a prolific staple of crime fiction, but Jeong’s portrait of Seryong, a young girl unforgivably betrayed by the very people whose job it was to keep her safe, saves her from being just one of many. Readers will think they know what actually happened to Seryong long before Sowon does, but they should be prepared for a few final twists. A moody and multifaceted psychological thriller.” —Kirkus Reviews

“[Seven Years of Darkness has] an intricate plot with a final twist that is quite gratifying.” —Korean Literature Now

Praise for You-Jeong Jeong and The Good Son:

“At long last, South Korea’s preeminent author of psychological thrillers has arrived Stateside. The Good Son . . . [is] a perfect introduction: an ingeniously twisted mother-son saga that keeps your heart pumping—and then breaks it.” —Entertainment Weekly

“A chilling portrait of a psychopath, and a beautifully evocative tale of wealth and isolation in modern South Korean life. You-Jeong Jeong has been called the Stephen King of South Korea, although I’d prefer to compare her to Lionel Shriver, Dorothy B. Hughes, or Patricia Highsmith.” —Molly Odintz, Lit Hub

“Absorbing . . . An unlikely thriller that we continue to read—thanks to Ms. Jeong's controlled prose...with a sickened sort of fascination. It's a testament to the author's skill and seriousness of purpose that she maintains suspense about her inhuman-seeming protagonist's fate until the bitter end.” —The Wall Street Journal

“Hard to put down.” —The Financial Times

“Jeong expertly inches up the tension in this crafty, creepy story.” —The Guardian

“Jeong’s thrillers are wildly popular in South Korea, and we’ll soon learn why . . . The gore is intense, but the psychological terror might never wash off.” —Vulture

“A precise, meticulously plotted thriller . . . The tension comes from Jeong’s prose, which spares not a single word . . . [The Good Son] sucks you in with precision and holds your attention, leaving you with a satisfying resolution.” —World Literature Today

“A slow-burn psychological thriller with plenty of twists and things to think about.” —BookRiot

“[This] psychological thriller . . . will completely keep you interested all summer long.” —Brit + Co

“[A] psychological murder mystery [that] subverts the usual clichés of its genre.” —Electric Literature

“A cool, crafty did-he-do-it thriller buoyed by a rising tide of madness. Provocative yet profound, humming with mood and menace, The Good Son will rivet readers of Jo Nesbo and Patricia Highsmith.” —A. J. Finn, #1 New York Times bestselling author of The Woman in the Window