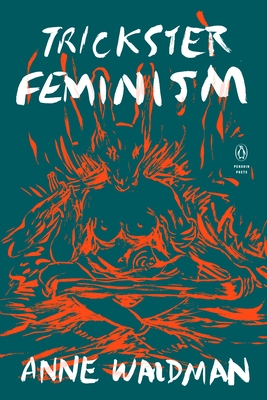 New from celebrated poet and performer Anne Waldman - an edgy, visionary collection that meditates on gender, existence, passion and activism

Mythopoetics, shape shifting, quantum entanglement, Anthropocene blues, litany and chance operation play inside the field of these intertwined poems, which coalesced out of months of protests with some texts penned in the streets. Anne Waldman looks to the imagination of mercurial possibility, to the spirits of the doorway and of crossroads, and to language that jolts the status quo of how one troubles gender and outwits patriarchy. She summons Tarot's Force Arcana, the passion of the suffragettes, and various messengers and heroines of historical, hermetic, and heretical stance, creating an intersectionality of lived experience: class, sexuality, race, politics all enter the din. These are experiments of survival.

Anne Waldman is a revered poet, performer, professor, editor and cultural activist. She is the author of more than forty-five books, including Gossamurmur, Manatee/Humanity, Structure of the World Compared to a Bubble, and the feminist epic The Iovis Trilogy, which won the 2012 PEN Center USA Award for poetry. The recipient of the Poetry Society of America's Shelley Memorial Award, a Guggenheim Fellowship, and the Before Columbus Foundation's Lifetime Achievement Award, Waldman makes her home in New York City and in Boulder Colorado, where she is a Distinguished Professor of Writing and Poetics and Artistic Director of the Summer Writing Program at Naropa University.

“The pervading mood in Trickster Feminism is of a piece with our national mood: gloom-filled, sorrowing, yet occasionally threaded with hope . . . Reading Waldman is like being in the world today.” —Daisy Fried, The New York Times Book Review

“Waldman calls upon multiple resources – spirits, suffragettes, and heroines alike – to help defeat the trickster who disempowers women through capitalism and other tools . . . Waldman presents a complicated panorama of places and events – including resistance after the 2016 U.S. presidential election – in these accomplished, intertwined pieces.” —The Washington Post

“Very apropos and very prescient . . . what’s reeling and alive is the freshness of topicality, personal and public, in this collection:  ICE and immigration, the DOJ’s current personnel, the Women’s March, Oligarchism and global money laundering, technocracy, ‘Anthropocene weather complexities, nuclear threats, and so on.” —The Brooklyn Rail

“Reads like a spellbook — a mix of prose, verse, illustration and photography, woven together like the instructions to a ritual.  But the incantatory poetry of Trickster Feminism is practical magic, Waldman’s way of meditating on — and taking action against — what she says are increasingly difficult times.” —PBS.org

“Waldman’s poems are layered, enchanting, and challenging, but if you’re willing to go along for the ride, their movements will unsettle your thinking on gender, feminism, and the political powers at large in the United States today.” —Tricycle Magazine

“Waldman searches folklore and legends for wily women overlooked as members of the trickster canon and claims trickster’s power for the present resistance.  In the process, she imagines a new mythology to serve as the model for an uncertain future feminism.” —PoetryFoundation.org

“Trickster Feminism arrives in the nick of time as a lightning strike of wisdom that illuminates this moment in history. Anne Waldman's voice is epic, mythic and above all, wild. She gives us direct courage from the force of her great heart. Her words: sacred text.” —Terry Tempest Williams

“Trickster Feminism spins wily counter-logics and connection in lyrics and chants supple enough to face pervasive death--of friends, the body count in our century's nameless global war, and even the planet's epochal decease. Waldman's poems enact insubordination, a kind of pinwheel parataxis, to offer a necessary second sight. We are summoned to peer past appearances, past the sense of square one beginnings and ineluctable dead ends. Instead, we are invited to raise our gaze afresh and to rise to our feet.” —Erica Hunt

“Wit, real teaching and speed all meet up here. Words fall out as the pace quickens, it’s like a clown car bumping into itself, then suddenly the poet takes charge, and backs us right into a confetti of deceptively wacky oracular pronouncements. This is such a read. Trickster Feminism is an awesomely serious book, Anne Waldman’s poetry being nothing but the eye and sound of prophecy itself.” —Eileen Myles

“A rich exploration of how we can escape the straightjacket of gender norms and assumptions . . . [Waldman’s] language is by turns sensual and lush, pointed and playful.” —Lion’s Roar

“Anne Waldman's passionate, quick-witted poetry doesn't back down or away from anything, outer or inner, big or small, and confronts an exceptionally wide range of experience and feeling.  Playful, ingenious, edgy, vital in its feminism and in its humanity, Trickster Feminism is a gathering (to paraphrase Frank O'Hara) of political meditations in a time of emergency.  One comes away from her poetry stimulated and—rarest of all these days—hopeful.”  —Charles North

“Caught in the uncanny glint of the trickster gaze, this book contains a masterful, instructive set of texts. Easily a classic on par with Diane Di Prima’s Revolutionary Letters. There is a torn and highly addictive edge to its line, a restless counterpoint that feels in rhythm with our current struggle.” —Cedar Sigo

“An essential poet of our time, Anne Waldman hears the centuries rousted from their sleep in Trickster Feminism.  She sees how the cosmic plight can be turned around in the concealed fragility of late capitalism, and she never fears standing inside the entanglements.” —CAConrad

“Acclaimed poet Waldman plumbs the variations and nuances of female subjectivity and paths to liberation through the performance of words and rituals. . . . the subtext is a rich and stirring commentary on feminine empowerment.” —Publisher's Weekly