How the World Moves: The Odyssey of an American Indian Family (Paperback) 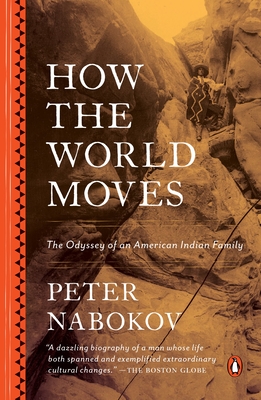 By Peter Nabokov
$20.00
Special Request - May Not Be Available

Born in 1861 in New Mexico’s Acoma Pueblo, Edward Proctor Hunt lived a tribal life almost unchanged for centuries. But after attending government schools he broke with his people’s ancient codes to become a shopkeeper and controversial broker between Indian and white worlds. As a Wild West Show Indian he travelled in Europe with his family, and saw his sons become silversmiths, painters, and consultants on Indian Lore. In 1928, in a life-culminating experience, he recited his version of the origin myth of Acoma Pueblo to Smithsonian Institution scholars.

Nabokov narrates the fascinating story of Hunt’s life within a multicultural and historical context. Chronicling Pueblo Indian life and Anglo/Indian relations over the last century and a half, he explores how this entrepreneurial family capitalized on the nation’s passion for Indian culture. In this rich book, Nabokov dramatizes how the Hunts, like immigrants throughout history, faced anguishing decisions over staying put or striking out for economic independence, and experienced the pivotal passage from tradition to modernity.

Peter Nabokov is a professor of world arts and cultures and American Indian studies at UCLA. His previous books include Where the Lightning Strikes and Indian Running, and he edited the volume Native American Testimony. He lives in Los Angeles.

Praise for How the World Moves

“[A] dazzling biography of a man whose life both spanned and exemplified extraordinary cultural changes . . . How the World Moves generates its own dizzying cosmology, a universe in which cultures collide, indigenous people become refugees, and many have to ‘strike hard bargains between tradition and progress.’”
– The Boston Globe

“For me what emerges in the story of Edward Hunt and his family is how resilient and generous-hearted they were.”
– Ian Frazier, The New York Review of Books

“A very good book. . .the background Nabokov provides. . .is as rich as any American story can be, with twists and turns and unlikely alliances.”
– The Portland Oregonian

“A comprehensively researched biographical epic. . .How the World Moves is not only Hunt’s story, it is also a history of the time he lived in and the socioeconomic forces that shaped that time.”
– The Santa Fe New Mexican

“Colonialism and dispossession cast such a shadow over the American past that it takes extraordinary effort to uncover the complexity and inventiveness of the indigenous people whose home this is.  This brilliant family biography shines a floodlight onto the last century of Indian experience, lifting some of that shadow and revealing extraordinary people who were both heroic survivors and creative architects of a new, modern identity. Nabokov has produced an epic, instructive tale.  If you thought you understood America and its past: think again.”
– Frederick E. Hoxie, author of This Indian Country: American Indian Activists and the Place They Made

"Peter Nabokov's How the World Moves is a beautiful journey over a terrain of race, culture, and Native American identity.  Nobody weaves American Indian lore together with the tick-tock realities of the modern condition more brilliantly than Nabokov."
– Douglas Brinkley, author of The Wilderness Warrior:  Theodore Roosevelt and the Crusade for America