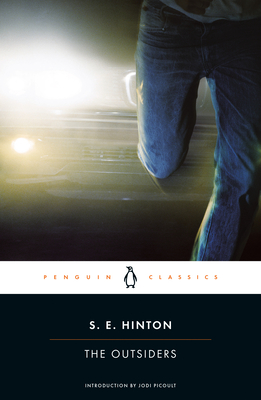 
Available to Order - Usually Arrives in Our Store in 4 to 7 Days
Celebrate the 50th anniversary (April, 2017) of a landmark coming-of-age American novel with a Penguin Classics edition featuring an introduction by Jodi Picoult, author of My Sister's Keeper. Nominated as one of America’s best-loved novels by PBS’s The Great American Read

First published in 1967, S. E. Hinton's novel was an immediate phenomenon. Today, with more than eight million copies sold, The Outsiders continues to resonate with its powerful portrait of the bonds and boundaries of friendship.

In Ponyboy's world there are two types of people. There are the Socs, the rich society kids who get away with anything. Then there are the greasers, like Ponyboy, who aren't so lucky. Ponyboy has a few things he can count on: his older brothers, his friends, and trouble with the Socs, whose idea of a good time is beating up greasers. At least he knows what to expect-until the night things go too far.

Susan Eloise Hinton published The Outsiders during her freshman year at the University of Tulsa. Today, with more than eight million copies in print, the book is the best-selling young adult novel of all time, made into a film directed by Francis Ford Coppola and starring Emilio Estevez, Patrick Swayze, Matt Dillon, and Tom Cruise. She received the American Library Association and School Library Journal first annual Margaret A. Edwards Award, which honors authors whose "book or books, over a period of time, have been accepted by young people as an authentic voice that continues to illuminate their experiences and emotions, giving insight into their lives."

Jodi Picoult grew up in Nesconset, New York. She received her A.B. in Creative Writing from Princeton University, and her M.Ed. from Harvard University.