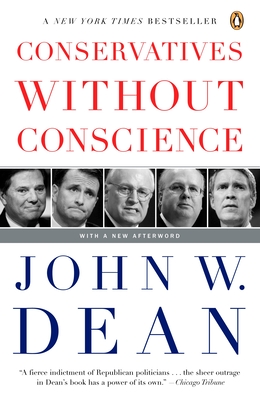 
Email or call for price. Handling fee may apply.
On the heels of his national bestseller Worse Than Watergate, John Dean takes a critical look at the current conservative movement

In Conservatives Without Conscience, John Dean places the conservative movement's inner circle of leaders in the Republican Party under scrutiny. Dean finds their policies and mind- set to be fundamentally authoritarian, and as such, a danger to democracy. By examining the legacies of such old-line conservatives as J. Edgar Hoover, Spiro Agnew, and Phyllis Schlafly and of such current figures as Dick Cheney, Newt Gingrich, and leaders of the Religious Right, Dean presents an alarming record of abuses of power. His trenchant analysis of how conservatism has lost its bearings serves as a chilling warning and a stirring inspiration to safeguard constitutional principles.
John Dean was White House legal counsel to President Nixon for a thousand days. Dean also served as chief minority counsel for the House Judiciary Committee and as an associate deputy attorney general in the U.S. Department of Justice.
"A penetrating and highly disturbing portrait of many of the major players in Republican politics and power ... riveting."
-Booklist, starred review

"A fierce indictment of Republican politicians ... the sheer outrage in Dean's book has power of its own."
-Chicago Tribune