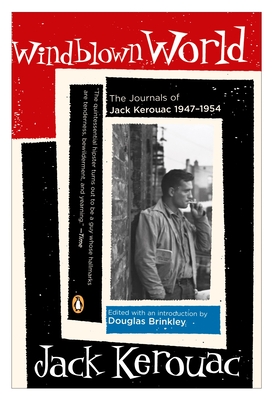 
Title unavailable, please email for information.
Selections from Jack Kerouac’s journals of the late 1940s and early 1950s – the raw material for what became his classic novel On the Road

September 5, 2017, marks the 60th anniversary of the publication of On the Road

Jack Kerouac is best known through the image he put forth in his autobiographical novels. Yet it is only his private journals, in which he set down the raw material of his life and thinking, that reveal to us the real Kerouac. In Windblown World, distinguished Americanist Douglas Brinkley has gathered a selection of journal entries from the most pivotal period of Kerouac’s life, 1947 to 1954. Here is Kerouac as a hungry young writer finishing his first novel while forging crucial friendships with Allen Ginsberg, William S. Burroughs, and Neal Cassady. Truly a self-portrait of the artist as a young man, this unique and indispensable volume is sure to become an integral element of the Beat oeuvre.
Jack Kerouac was born in Lowell, Massachusetts, in 1922, the youngest of three children in a Franco-American family. He attended local Catholic and public schools and won a scholarship to Columbia University in New York City, where he first met Neal Cassady, Allen Ginsberg, and William S. Burroughs. His first novel, The Town and the City, appeared in 1950, but it was On the Road, published in 1957 and memorializing his adventures with Neal Cassady, that epitomized to the world what became known as the “Beat generation” and made Kerouac one of the most best-known writers of his time. Publication of many other books followed, among them The Dharma Bums, The Subterraneans, and Big Sur. Kerouac considered all of his autobiographical fiction to be part of “one vast book,” The Duluoz Legend. He died in St. Petersburg, Florida, in 1969, at the age of forty-seven.
"The quintessential hipster turns out to a be a guy whose hallmarks are tenderness, bewilderment, and yearning." --Time

"A story of self-invention, perseverance, and breakthrough. . . . The traditional rap against Kerouac--that he was a sort of half-baked dopehead primitivist who prized sensation over sense--crumbles on a reading of his journals. . . . What Kerouac wanted most, these journals reveal, was to dig down into the dark American earth as his heroes Twain and Whitman had and turn up his own rich shovelful of truth.” --Walter Kirn, The New York Times Book Review

"A must read for anyone who has an interest in Kerouac and the Beats." --Johnny Depp