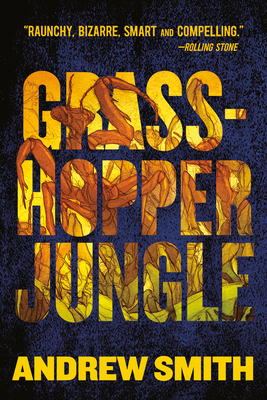 This is the truth. This is history.
It’s the end of the world. And nobody knows anything about it.
You know what I mean.

Funny, intense, complex, and brave, Grasshopper Jungle brilliantly weaves together everything from testicle-dissolving genetically modified corn to the struggles of recession-era, small-town America in this groundbreaking coming-of-age stunner.

Andrew Smith is the award-winning author of several young adult novels, including the critically acclaimed Winger and The Marbury Lens. He is a native-born Californian who spent most of his formative years traveling the world. His university studies focused on Political Science, Journalism, and Literature. He has published numerous short stories and articles. Grasshopper Jungle is his seventh novel. He lives in Southern California. You can learn more at authorandrewsmith.com and follow him on Twitter: @marburyjack.

“A literary joy to behold. . . . reminds me of Kurt Vonnegut’s Slaughterhouse Five, in the best sense.”
—The New York Times Book Review

"This raunchy, bizarre, smart and compelling sci-fi novel defies description – it's best to go into it with an open mind and allow yourself to be first drawn in, then blown away."
—Rolling Stone

“[Grasshopper Jungle] reads more like an absurdist Middlesex… and is all the better for it. A-”
—Entertainment Weekly

“If you appreciate kooky humor, sentences that bite, and a nuanced understanding of human beings’ complicated natures and inexplicable actions, then you, too, will love Smith’s bold, bizarre, and beautiful novel.”
—The Boston Globe

“The end of the world comes with neither a bang nor a whimper but with a dark chuckle and the ominous click-click of giant insect mandibles in this irreverent, strangely tender new novel by Andrew Smith. This but hints at the intricately structured, profound, profanity-laced narrative between these radioactive-green covers.”
—The Washington Post

“Andrew Smith’s writing grabs you. He takes phrases and turns them into recurring motifs that punctuate the story, until by the end you start to expect them, maybe even mutter them to yourself. And the way that he takes all these seemingly disparate plot strands and weaves them together is masterful… Once you get lost in Grasshopper Jungle you won’t want to be found.”

“No author writing for teens today can match Andrew Smith’s mastery of the grotesque, the authentic experiences of teenage boys or the way one seamlessly becomes a metaphor for the other.”
—BookPage, Top February Teen Pick

"A meanderingly funny, weirdly compelling and thoroughly brilliant chronicle of ‘the end of the world, and shit like that’...a mighty good book."
—Kirkus, starred review

"Filled with gonzo black humor, Smith's outrageous tale makes serious points about scientific research done in the name of patriotism and profit, the intersections between the personal and the global, the weight of history on the present, and the often out-of-control sexuality of 16-year-old boys."
— Publishers Weekly, starred review

“Grasshopper Jungle plays like a classic rock album, a killing machine of a book built for the masses that also dives effortlessly into more challenging, deeper regions of emotion. Above all else, when it's done you want to play it all over again. It's sexy, gory, hilarious, and refreshingly amoral. I wish I'd had this book when I was fifteen. It almost makes me sad that it took twenty years to finally find what I'd been looking for.”
—Jake Shears, lead singer of Scissor Sisters

“Grasshopper Jungle is a cool/passionate, gay/straight, male/female, absurd/real, funny/moving, past/present, breezy/profound masterpiece of a book.  Every time you think you've figured it out, you haven't.  Every time you're sure Andrew Smith must do this, he does that instead. Grasshopper Jungle almost defies description because description can only rob the reader of the pleasure of surrendering to a master storyteller.  Original, weird, sexy, thought-provoking and guaranteed to stir controversy.  One hell of a book.”
—Michael Grant, New York Times bestselling author of the Gone series

“I found myself saying over and over again, ‘Where in the heck is he going with this?’ all the while turning the pages as fast as I could. Mostly I kept thinking, This was a brave book to write.”
—Terry Brooks, author of the Shannara series

“Andrew Smith is the bravest storyteller I know. Grasshopper Jungle is the most intelligent and gripping book I've read in over a decade. I didn't move for two days until I had it finished. Trust me. Pick it up right now. It's a masterpiece.”
—A. S. King, Printz Honor-winning author of Ask the Passengers and Please Ignore Vera Dietz

“In Grasshopper Jungle, it’s as if Andrew Smith is somehow possessed by the ghost of Kurt Vonnegut. This book is nothing short of a brilliant, hilarious thrill-ride that is instantly infectious. But, the most beautiful thing about Grasshopper Jungle has nothing to do with the absurd or out-of-this-world. It is the deft hand by which Smith explores teenage love and sexuality that is truly breathtaking. In writing a history of the end of the world, Smith may have just made history himself.”
—John Corey Whaley, Printz Award-winning author of Where Things Come Back

“Grasshopper Jungle is about the end of the world. And everything in between.”
—Alex London, author of Proxy

“Austin’s narrative voice fizzes with catchphrases that keep the reader on track as he dives into history and backstory. His obsessively repetitive but somehow endearing style calls to mind Vonnegut and Heller. This novel approaches its own edge of sophisticated brutality, sensory and intellectual overload, and sheer weirdness, and then jumps right off.”
—BCCB

Stick (2011)
ALA/YALSA Best Fiction for Young Adults
“Smith revs up the emotions and the violence in this realistic and powerful tale…” –Publishers Weekly, starred review**