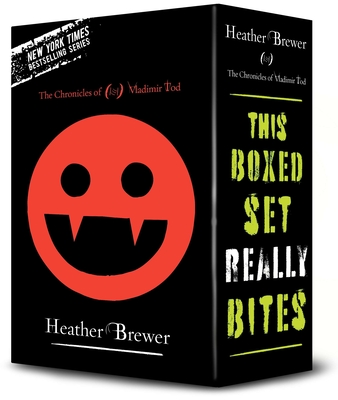 The New York Times bestselling series from Heather Brewer is now available in one box set!

Freshman year stinks for Vlad. Bullies still harass him. The photographer from the school newspaper is tailing him. And failing his studies could be deadly. A trip to Siberia gives “study abroad” a whole new meaning as Vlad connects with other vampires and advances his mind-control abilities, but will he return home with the skills to recognize a vampire slayer when he sees one?

It’s another awful year at Bathory High for Vlad. The evil vampire D’Ablo is hunting for the ritual that could steal Vlad’s powers. His best friend doesn’t want to be his drudge anymore. And it’s getting harder for Vlad to resist feeding on the people around him. When months go by with no word from Uncle Otis, and D’Ablo shows up demanding Vlad’s father’s journal, Vlad realizes having a normal high school year is the least of his concerns. Vlad needs to act fast, and even his status as the Pravus won’t save him this time.

Eleventh grade at Bathory High is draining Vlad. Joss, a professional vampire slayer and Vlad’s former friend, has moved back to town. The powerful vampire Dorian has an overwhelming desire to drink Vlad’s blood. And his archenemy, D’Ablo, has brought Vlad’s uncle Otis to trial for crimes against vampires. So much for dating. When the tables turn on Vlad, he has just enough time to return to Bathory for his final good-byes.
Heather Brewer was not your typical teen growing up. She wore black, danced under full moons, and devoured every book in sight. She hasn't changed much. Today, Heather can be found writing in her funky, black Happy Bunny jammie pants, dancing under a full moon, devouring every book in sight, and attending renaissance faire in full costume (and in character).

When Heather's not writing, dressing up, dancing and reading, she's answering email, which she loves to get over at her website.