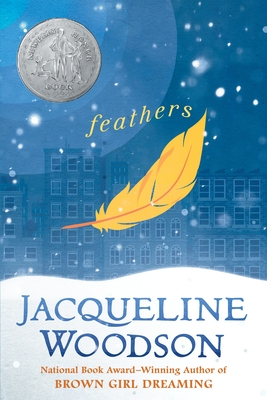 
On Our Shelves Now
A Newbery Honor Book

“Hope is the thing with feathers” starts the poem Frannie is reading in school. Frannie hasn’t thought much about hope. There are so many other things to think about. Each day, her friend Samantha seems a bit more “holy.” There is a new boy in class everyone is calling the Jesus Boy. And although the new boy looks like a white kid, he says he’s not white. Who is he?

During a winter full of surprises, good and bad, Frannie starts seeing a lot of things in a new light—her brother Sean’s deafness, her mother’s fear, the class bully’s anger, her best friend’s faith and her own desire for “the thing with feathers.”

Jacqueline Woodson once again takes readers on a journey into a young girl’s heart and reveals the pain and the joy of learning to look beneath the surface.

"[Frannie] is a wonderful role model for coming of age in a thoughtful way, and the book offers to teach us all about holding on to hope."—Children's Literature

"A wonderful and necessary purchase for public and school libraries alike."—VOYA

Jacqueline Woodson (www.jacquelinewoodson.com) is the recipient of a 2020 MacArthur Fellowship, the 2020 Hans Christian Andersen Award, the 2018 Astrid Lindgren Memorial Award, and the 2018 Children’s Literature Legacy Award. She was the 2018–2019 National Ambassador for Young People’s Literature, and in 2015, she was named the Young People’s Poet Laureate by the Poetry Foundation. She received the 2014 National Book Award for her New York Times bestselling memoir Brown Girl Dreaming, which was also a recipient of the Coretta Scott King Award, a Newbery Honor, the NAACP Image Award, and a Sibert Honor. She wrote the adult books Red at the Bone, a New York Times bestseller, and Another Brooklyn, a 2016 National Book Award finalist. Born in Columbus, Ohio, Jacqueline grew up in Greenville, South Carolina, and Brooklyn, New York, and graduated from college with a B.A. in English. She is the author of dozens of award-winning books for young adults, middle graders, and children; among her many accolades, she is a four-time Newbery Honor winner, a four-time National Book Award finalist, and a three-time Coretta Scott King Award winner. Her books include Coretta Scott King Award winner Before the Ever After; New York Times bestsellers The Day You Begin and Harbor Me; The Other Side, Each Kindness, Caldecott Honor book Coming On Home Soon; Newbery Honor winners Feathers, Show Way, and After Tupac and D Foster; and Miracle's Boys, which received the LA Times Book Prize and the Coretta Scott King Award. Jacqueline is also a recipient of the Margaret A. Edwards Award for lifetime achievement for her contributions to young adult literature and a two-time winner of the Jane Addams Children's Book Award. She lives with her family in Brooklyn, New York.