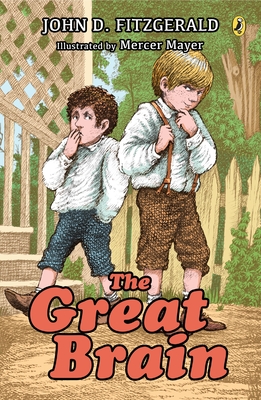 This is book number 1 in the The Great Brain series.

This first book in the series is a great combination of The Adventures of Tom Sawyer and The Terrible Two series, and is perfect for fans of Roald Dahl.

The best con man in the Midwest is only ten years old.  Tom, a.k.a., the Great Brain, is a silver-tongued genius with a knack for turning a profit.  When the Jenkins boys get lost in Skeleton Cave, the Great Brain saves the day.  Whether it's saving the kids at school, or helping out Peg-leg Andy, or Basil, the new kid at school, the Great Brain always manages to come out on top-and line his pockets in the process.
John D. Fitzgerald was born in Utah and lived there until he left at eighteen to begin a series of interesting careers ranging from jazz drummer to foreign correspondent. His stories of The Great Brain were based on his own childhood in Utah with a conniving older brother named Tom. These reminiscenses led to eight memorable Great Brain books. John D. Fitzgerald also wrote several best-selling adult books, including Papa Married a Mormon. He died in Florida, his home of many years, at the age of eighty-one.