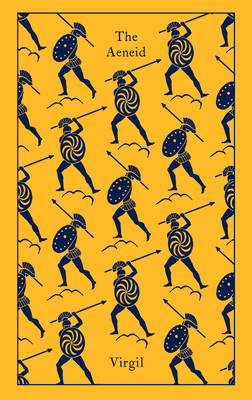 Fleeing the ashes of Troy, Aeneas, Achilles’ mighty foe in the Iliad, begins an incredible journey to fulfill his destiny as the founder of Rome. His voyage will take him through stormy seas, entangle him in a tragic love affair, and lure him into the world of the dead itself--all the way tormented by the vengeful Juno, Queen of the Gods. Ultimately, he reaches the promised land of Italy where, after bloody battles and with high hopes, he founds what will become the Roman empire. An unsparing portrait of a man caught between love, duty, and fate, the Aeneid redefines passion, nobility, and courage for our times. Robert Fagles, whose acclaimed translations of Homer’s Iliad and Odyssey were welcomed as major publishing events, brings the Aeneid to a new generation of readers, retaining all of the gravitas and humanity of the original Latin as well as its powerful blend of poetry and myth. Featuring an illuminating introduction to Virgil’s world by esteemed scholar Bernard Knox, this volume lends a vibrant new voice to one of the seminal literary achievements of the ancient world.
Publius Vergilius Maro (70-19 B.C.), known as Virgil, was born near Mantua in the last days of the Roman Republic. In his comparatively short life he became the supreme poet of his age, whose Aeneid gave the Romans a great national epic equal to the Greeks’, celebrating their city’s origins and the creation of their empire. Virgil is also credited  with authoring two other major works of Latin literature, the Eclogues and the Georgics.

Robert Fagles (1933-2008) was Arthur W. Marks ’19 Professor of Comparative Literature, Emeritus, at Princeton University. He was the recipient of the 1997 PEN/Ralph Manheim Medal for Translation and a 1996 Award in Literature from the American Academy of Arts and Letters. His translations include Sophocles’s Three Theban Plays, Aeschylus’s Oresteia (nominated for a National Book Award), Homer’s Iliad (winner of the 1991 Harold Morton Landon Translation Award by The Academy of American Poets), Homer’s Odyssey, and Virgil's Aeneid.

Bernard Knox (1914-2010) was Director Emeritus of Harvard’s Center for Hellenic Studies in Washington, D.C. He taught at Yale University for many years. Among his numerous honors are awards from the National Institute of Arts and Letters and the National Endowment for the Humanities. His works include The Heroic Temper: Studies in Sophoclean Tragedy, Oedipus at Thebes: Sophocles’ Tragic Hero and His Time and Essays Ancient and Modern (awarded the 1989 PEN/Spielvogel-Diamonstein Award).
"A new and noble standard bearer . . . There's a capriciousness to Fagles's line well suited to this vast story's ebb and flow."
-The New York Times Book Review (front page review)

"Fagles's new version of Virgil's epic delicately melds the stately rhythms of the original to a contemporary cadence. . . . He illuminates the poem's Homeric echoes while remaining faithful to Virgil's distinctive voice."
-The New Yorker

"Robert Fagles gives the full range of Virgil's drama, grandeur, and pathos in vigorous, supple modern English. It is fitting that one of the great translators of The Iliad and The Odyssey in our times should also emerge as a surpassing translator of The Aeneid."
-J. M. Coetzee