The Phantom of the Opera (Paperback) 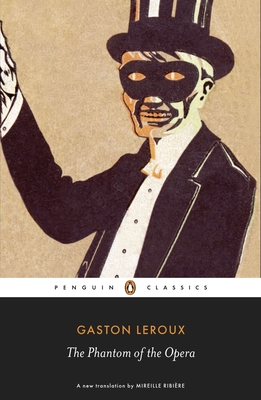 A sparkling new translation of the novel that inspired the most popular stage musical of all time.

Rumors abound that a ghost stalks the dark passages and cellars of the Paris Opera House. No one has actually seen this Phantom, but Christine Daaé, a beautiful and talented young singer, has heard his voice. He is her "Angel of Music," coaching her to sing as she never could before. When the handsome Viscount begins to court Christine, the mysterious Phantom-consumed by jealousy-rises up to seek revenge.

This new translation of The Phantom of the Opera captures the Gothic horror and tragic romance of Gaston Leroux's timeless original. It is published with a new introduction that examines the Phantom's legacy and uncovers the secrets of the Paris Opera.

For more than sixty-five years, Penguin has been the leading publisher of classic literature in the English-speaking world. With more than 1,500 titles, Penguin Classics represents a global bookshelf of the best works throughout history and across genres and disciplines. Readers trust the series to provide authoritative texts enhanced by introductions and notes by distinguished scholars and contemporary authors, as well as up-to-date translations by award-winning translators.

Gaston Leroux, born in Paris in 1868, was a French journalist, playwright, and detective/thriller writer. Beginning his career as a crime reporter and war correspondent, he lived an adventurous life that took him to Scandinavia, Eastern Europe, and even into North Africa disguised as an Arab. His high-spirited, often dangerous, escapades and questioning nature provided much of the background and plot material for his sensational mystery and adventure stories, particularly those starring his reporter-sleuth, Joseph Rouletabille. One of his most famous detective novels, The Mystery of the Yellow Room, was published in 1907, and his works have been called “among the finest examples of the detective stories we possess.” But Leroux’s best-known story is The Phantom of the Opera (1911), whose macabre hero has been played in film by classic horror film stars Lon Chaney and Claude Rains. Leroux died in Nice in 1927.

Mireille Ribière is a freelance author and translator. She holds a PhD in twentieth-century French literature from the University of London and is a well-known specialist of the work of French writer Georges Perec. She has published extensively in the fields of twentieth century literature, as well as photography and the visual arts.