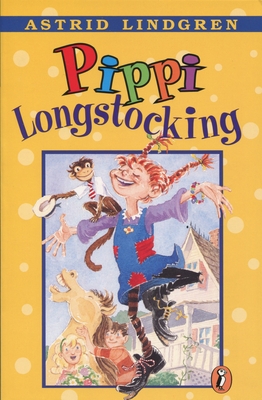 
On Our Shelves Now
The beloved story of a spunky young girl and her hilarious escapades.

Tommy and his sister Annika have a new neighbor, and her name is Pippi Longstocking. She has crazy red pigtails, no parents to tell her what to do, a horse that lives on her porch, and a pet monkey named Mr. Nilsson. Whether Pippi’s scrubbing her floors, doing arithmetic, or stirring things up at a fancy tea party, her flair for the outrageous always seems to lead to another adventure.

"A rollicking story." —The Horn Book
Astrid Lindgren (1907-2002) was born in Sweden. After college, she worked in a newspaper office and a Swedish publishing house. Her most famous and beloved book, Pippi Longstocking, was originally published in Swedish in 1950, and was later translated into many other languages. It was followed by two sequels, Pippi Goes on Board and Pippi in the South Seas. Ms. Lindgren had a long, prolific career, writing more than 100 picture books, poems, short stories, plays, screenplays, and novels. In 1958, she won the Hans Christian Andersen Medal, the highest international award in children's literature.