Beyond the Hundredth Meridian: John Wesley Powell and the Second Opening of the West (Paperback) 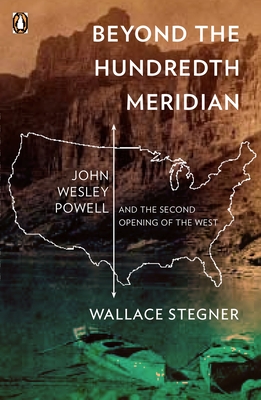 Beyond the Hundredth Meridian: John Wesley Powell and the Second Opening of the West (Paperback)


On Our Shelves Now
From the “dean of Western writers” (The New York Times) and the Pulitzer Prize winning–author of Angle of Repose and Crossing to Safety, a fascinating look at the old American West and the man who prophetically warned against the dangers of settling it

In Beyond the Hundredth Meridian, Wallace Stegner recounts the sucesses and frustrations of John Wesley Powell, the distinguished ethnologist and geologist who explored the Colorado River, the Grand Canyon, and the homeland of Indian tribes of the American Southwest. A prophet without honor who had a profound understanding of the American West, Powell warned long ago of the dangers economic exploitation would pose to the West and spent a good deal of his life overcoming Washington politics in getting his message across. Only now, we may recognize just how accurate a prophet he was.
Wallace Stegner (1909–1993) published more than two dozen books throughout his life, including the novels Angle of Repose, which won the Pulitzer Prize; Crossing to Safety; The Big Rock Candy Mountain; and The Spectator Bird, which won the National Book Award. An early environmentalist, Stegner was instrumental—with his now famous “Wilderness Letter”—in the passage of the 1964 Wilderness Act.
"This book goes far beyond biography, into the nature and soul of the American West. It is Stegner at his best, assaying an entire era of our history, packing his pages with insights as shrewd as his prose." —Ivan Doig