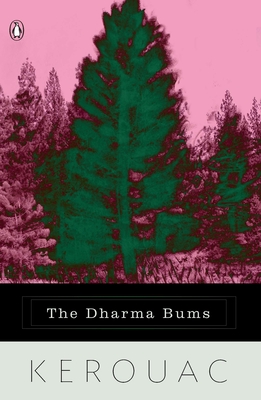 
On Our Shelves Now
Jack Kerouac’s classic novel about friendship, the search for meaning, and the allure of nature

First published in 1958, a year after On the Road put the Beat Generation on the map, The Dharma Bums stands as one of Jack Kerouac's most powerful and influential novels. The story focuses on two ebullient young Americans--mountaineer, poet, and Zen Buddhist Japhy Ryder, and Ray Smith, a zestful, innocent writer--whose quest for Truth leads them on a heroic odyssey, from marathon parties and poetry jam sessions in San Francisco's Bohemia to solitude and mountain climbing in the High Sierras.
Jack Kerouac was born in Lowell, Massachusetts, in 1922, the youngest of three children in a Franco-American family. He attended local Catholic and public schools and won a scholarship to Columbia University in New York City, where he first met Neal Cassady, Allen Ginsberg, and William S. Burroughs. His first novel, The Town and the City, appeared in 1950, but it was On the Road, published in 1957 and memorializing his adventures with Neal Cassady, that epitomized to the world what became known as the “Beat generation” and made Kerouac one of the most best-known writers of his time. Publication of many other books followed, among them The Dharma Bums, The Subterraneans, and Big Sur. Kerouac considered all of his autobiographical fiction to be part of “one vast book,” The Duluoz Legend. He died in St. Petersburg, Florida, in 1969, at the age of forty-seven.

"In [On the Road] Kerouac's heroes were sensation seekers; now they are seekers after truth . . . the novel often attains a beautiful dignity, and builds towards a moving climax."
--The Chicago Tribune

"In his often brilliant descriptions of nature one is aware of exhilarating power and originality . . . the entire cast of characters is presented with that not unrefreshing blend of naivete and sophistication that seems to be this author's forte."
--The New York Times Book Review

"Full of sparkling descritions of landscape and weather, light falling through trees, the smell of snow, the motion of animals . . . Jack Kerouac is a writer who cannot be charged with dullness."
--The Atlantic