They Call Me Coach (Paperback) 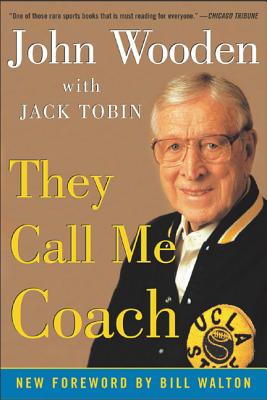 They Call Me Coach (Paperback)

The legendary coach talks about his life, his players, and his winning philosophies in this bestselling autobiography

John Wooden's dedication and inspiration made him America's "winningest" coach. His beliefs in hard work and preparedness brought the UCLA Bruins an unparalleled 10 NCAA basketball championships. Now in this bestselling autobiography--with a Foreword by Hall-of-Famer Bill Walton--the college basketball legend reflects on his record-breaking career, his life behind the scenes, and how his top players went on to shape and change the NBA.

From the everyday basics to important life lessons ("It's not how tall you are, but how tall you play"), Wooden shares his worldly wisdom on and off the court to offer a personal history of an unforgettable time in college basketball, answering the most-asked questions about his life, his career, and the players who made his teams unbeatable.

"They Call Me Coach is grass-roots Americana, a story bigger than basketball. One of those rare sports books that is must reading for everyone."
--Chicago Tribune

John Wooden (1910-2010), guided the UCLA Bruins to ten NCAA basketball championships over a 12-year period, including four perfect seasons and an 88-game winning streak. He was named ESPN's -Greatest Coach of the 20th Century- and voted -#1 Coach of All Time- by The Sporting News. Sports Illustrated said it best when they said: -There's never been a finer man in American sports than John Wooden, or a finer coach.- In 2003 John Wooden was awarded the Presidential Medal of Freedom.