No Borders: A Journalist's Search for Home (Hardcover) 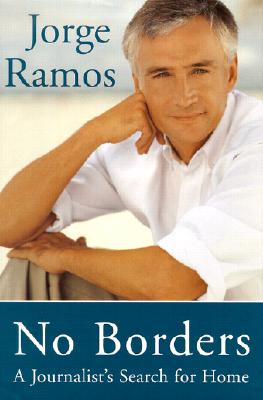 No Borders: A Journalist's Search for Home (Hardcover)

Home is a collection of memories. Home helps us understand who we were and who we are, and allows us to predict who we may one day become. Some leave home early in their lives and, thrill after thrill, struggle to get back to their emotional center. Without borders, these eternal wanderers never give up their search for life's next adventure, hoping that one day they will find a place that they can once again call home.

So begins the thoughtful journey of an extraordinarily sensitive autobiography from Jorge Ramos, a man who perfectly embodies this adventurous spirit, and who hopes to someday find that place where he may finally feel anchored.

Never before has Jorge Ramos, award-winning anchorman for America's top-rated Spanish-language nightly newscast, let readers into so personal a space. From the lovers he's had throughout his life to his passion for journalism to his own sense of fulfillment, Ramos allows us to personally know a man we've trusted to deliver the news for years. We realize that Ramos firmly grasps the idea that in order to live life to the fullest, one must take chances, and that risk is ultimately what leads one toward wisdom.

Ramos details his struggle as a student living in L.A. in the early 1980s, his first foray into American journalism, and the English-language establishment that told him he would amount to nothing if he didn't lose his accent. Ramos then invites us into the early days of Spanish-language news and media -- an industry that most early critics thought was useless and irrelevant -- whose now skyrocketing popularity has made it a powerful player in American culture.

From the many wars he has covered and the places he has seen to the world leaders he has interviewed, Jorge Ramos draws readers in with the powerful story of a man whose search and ambition for a career in journalism have led him to the country he would love to call home, but cannot. We come to know a man whose humor and sense of fearless adventure have simultaneously brought him close to, and saved him from death, and whose weekly Saturday soccer match is the closest he can get to a sure thing in a life layered with the trials of the unexpected.

A father, journalist, husband, and son, Ramos shows in No Borders that each of us can be a witness to history and that wandering may in fact be preferable to forever staying in one place.

Jorge Ramos has won eight Emmy Awards and the Maria Moors Cabot Award for excellence in journalism. He has been the anchorman for Univision News for the last twenty-one years and has appeared on NBC's Today, CNN's Talk Back Live, ABC's Nightline, CBS's Early Show, and Fox News's The O'Reilly Factor, among others. He is the bestselling author of No Borders: A Journalist's Search for Home and Dying to Cross. He lives in Florida.